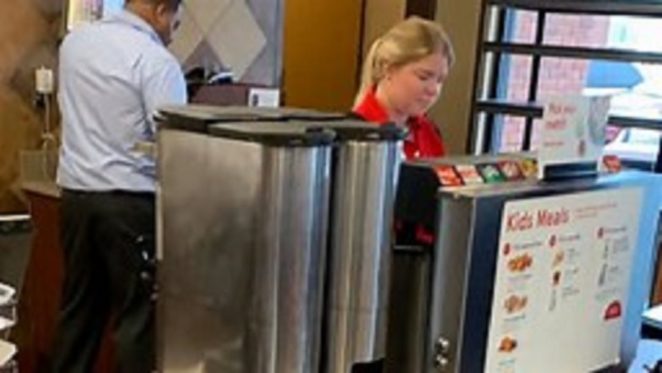 Chick Fil A is one fast food business that we can either admire for their policies based on Christian principles or hated for their stances on controversial issues that are considered bigoted and hateful.

However a cashier named Karina whose last name was not mentioned in the story was filmed by a customer named Robert Gooch who was in line to order his meal at a Chick Fil A fast food restaurant store in Jackson Mississippi about two weeks ago when a man who had a five dollar bill in his possession if he could order a meal within his means.

Normally Karina would have to ask the manager of the store if she could give a discount to the customer with the five dollar bill to make him happy since most fast food restaurants have this policy to give great service to the customers who pay the salary of the employees.

Karina decided to pay the bill for the customer who had in his possession a five dollar bill with no questions asked by telling him she would pay for his breakfast out of her own pocket as a favor to the customer.

Since we are in the era of social media, the sites of the social media sites have been instrumental in recording the good deeds that employees do for their customers, which in turn makes them as well as their employers gain a lot of fans.

Now could you imagine if a robot was to take the order of that same customer who only had $5 dollars to buy a breakfast meal? The robot would tell the customer that it is not possible for that transaction to happen since the restaurant would be saying that they are not a charity.

Whether we agree with the religious stances of Chick-Fil-A or not, we have the right to support them or find our meals somewhere else.