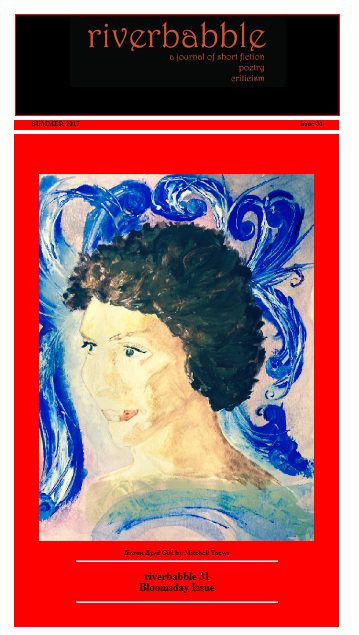 Small things that happen in a simple life. Or are they? A dog bite may be small to – for example – a lion tamer, but less inconsequential to most others. A story about a dog bite may be an uncomplicated retelling or it could be more – an imagining and a quick, unobscured peek into the lives of others.

Anyway – whatever the magic potion was, it was enough to make it into a publication that has a good many more stripes on its sleeves than me. I’ll take the upgrade and work hard not to aww-shucks it into something less than it is, nor succumb to the creeping inclination to think “CCCChhrist, I’m good!” as I run a board though the table saw and nip the tip of my pinky off, flitzing it into the nearby bush to become a snack for an omnivorous, unpretentious squirrel.

The story is “The Margin of the River” and it first appeared in the Canadian journal CommuterLit, last December as ‘”Gather by the River, Part 2″.  A painting of mine – “Brown Eyed Girl”, which has a small connection to the story, is the cover image of the Summer issue of riverbabble, number 31, Bloomsbury 2017.

Thanks to the kind people at Pandemonium Press for including my work in riverbabble.