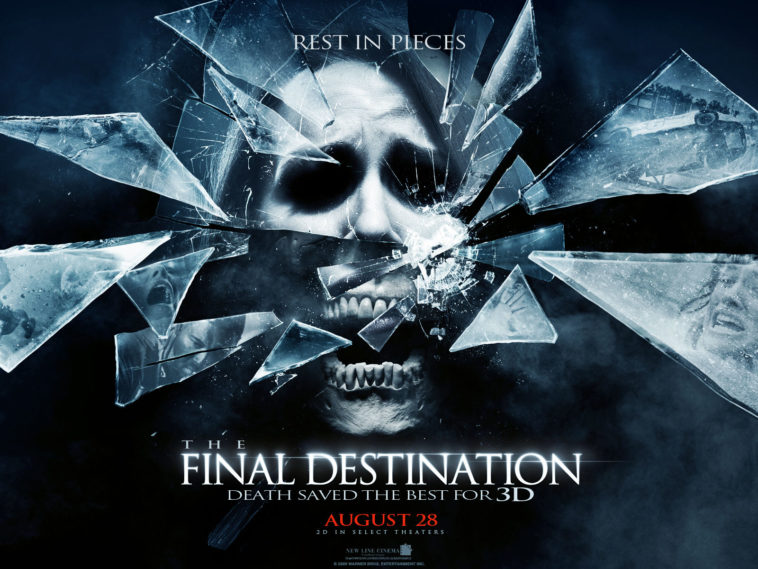 I am sure that many have at least seen one of the Final Destination movies. Personally, I have seen all five of them.  I thought I would write about my thoughts on the series.

The series starts out with the first movie where a plane full of students are getting ready to take off to Paris.  One of the students named Alex sees a premonition of the plane exploding and freaks out.  That gets him and 6 others thrown off the plane.

They think they are saved until they start dying in freak accidents one by one in the order they were supposed to die on the plane.  I won’t give away everything that happens in these movies however.

I thought the movie was very interesting, yet twisted.  Many people are afraid of flying on airplanes, and I can see this giving more people that fear.

The next movie in the series is sort of a follow up to the first movie.

It starts with a group of friends driving on the interstate. In the second movie the main female character, Kimberly, sees a preminition of an awful pileup happen on the road. She saves a bunch of people from dying in the wreck just like Alex in the first film.

The people that she saved from dying in the major accident think they are safe, but they start dying one by one as well.  Their deaths happen backwards in this film. Someone in the movie explains that the people that escaped the accident were all connected to people that got off the plane in the first film. They also explained that “death” was working backwards to tie up all loose ends.

The next film in the Final Destination series is the one with the roller coaster.  I thought it might be too repetitive since it’s part of the series,  but it’s very different.  It is still just as twisted as the first two.

This movie takes place on a roller coaster. Wendy (the main female character) has the preminition in this movie.  She freaks out like the other two lead characters and gets people to get off the ride (excluding her best friend and boyfriend).

After that, people start dying one by one.  I don’t think there is a specific order, but she finds the “clues” to how they will die in the pictures that she took for the yearbook.

The movie ends with the main character having another premonition of something awful happening. I won’t give away what that is though, like I said before I don’t want to give too much away.

The 4th movie in the series takes place at a race track where a group of friends is watching a car race.  The main character Nick has a preminition of a car having an accident and ending up in the crowd and everybody dying from that.  As the other films, he gets some people away from the accident and saves their lives…but not for long.

The end of this one is different because most of the friends survived. Are they safe for long though?  Well, I won’t give that away.

This one was called The Final Destination because it was meant to be the last one.

The fifth movie in the series is somewhat of a prequel to the other four films. This one takes place in a bus on a bridge that is undergoing construction.  The whole bridge collapses and many people die.  In the fifth movie, the main character Sam gets his friends and coworkers off the bus after having his premonition.

As the other four movies, his friends and coworkers start dying one by one like they would have in the bridge incident.

This movie is just as twisted as the others, if not more.

Tony Todd reprised his role in this film in the 5th part of the series.  He was in all the other’s except for the 4th Final Destination.

Thoughts on the series:

I thought the whole series was very interesting, even though very dark and twisted. It’s also gory, so if you are not a fan of gore you probably would not like these movies.

I heard they are supposed to come out with a sixth part of the series set back in the 1600’s (or something like that).  I think that would be very interesting to see.

Have you seen any of the Final Destination films?  If so, what did you think of them?  Which did you like the best, and the least?

I can’t say that I have a favorite or one that I dislike.