What do people truly believe? Do they base their lives on, and make their important decisions by, what they know to be true or only on what they think is true?

My contention is that myth is far more powerful to most people than reality, and the main reason for saying this is that most people have little idea that what they take to be real is actually myth. But does that actually matter?

A myth has been defined (by James Feibleman, an American writer and philosopher) as “a religion in which no one any longer believes”, and that is worth thinking about. Every ancient civilization that developed both writing and religion has bequeathed its mythology to later generations, and those myths were what formed the basis of its religion. The Ancient Greeks did actually believe that the gods, led by Zeus, lived on Mount Olympus.

And what about religious belief today? What is it based on? In most cases, the answer is what is contained in its holy books, and for Christianity that means the Old and New Testaments of the Bible – for Judaism it is the Old Testament plus a number of other religious works. The Christian and Jewish religions exist because its adherents take as fact certain things that are contained in the Bible – Jews do not accept certain things in the New Testament that Christians take as fact. For Jews, these Christian “facts” are myths.

But how do we know that any of it is fact? Could not all of it be myth? For example, the story of Moses leading the Hebrew slaves out of Egypt towards the Promised Land is a very powerful story, but it only exists within the pages of the Judaeo/Christian holy books. The Ancient Egyptians were meticulous recorders of just about everything that went on under their jurisdiction, but there is not a single word anywhere that refers to anyone called Moses or to the existence of thousands of Hebrew slaves who suddenly departed their territory (actually this could not have happened, because the “land of Israel” was still part of Egypt at the time these events were supposed to have taken place). 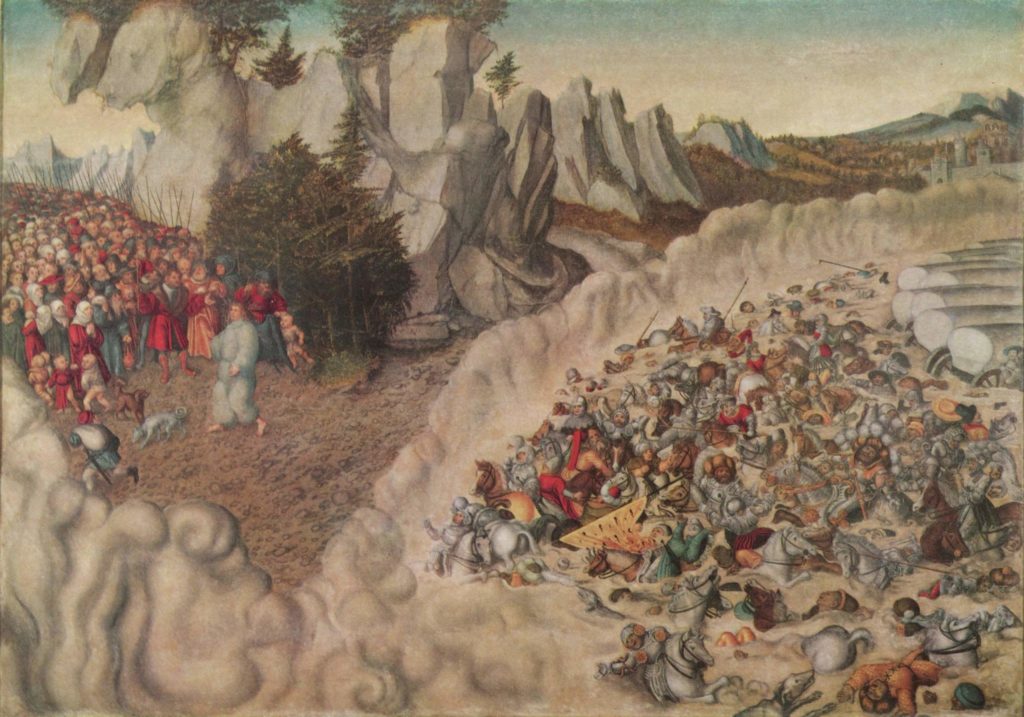 (Pharoah’s Hosts engulfed in the Red Sea, by Lucas Cranach)

However, these doubts do nothing to dent the faith of those people who believe in them. The stories have “myth” written all over them, but they are live myths instead of dead ones, because people still believe in them.

The role of myth in politics is extremely strong, and always has been. When a king or emperor wanted to enthuse his people to go to war he would spin the yarn that supported his case and make sure that the stories that said the opposite were suppressed. When he wanted to justify his actions, he would make sure that it was his myth that was believed.

An example of this would be the commissioning by King William I (the Conqueror) of the Bayeux Tapestry to perpetuate the myth that his claim to the English crown was justified by the fact that King Harold had broken a sacred oath to yield to the throne to William on the death of Edward the Confessor. But apart from the Tapestry there is no evidence to suggest that such an oath was ever taken. That did not matter – what mattered was that the myth was believed.

Modern politics is also full of myths, and the plethora of “fake news” stories is confirmation of this. When a politician wants to gain support for a point of view, spreading a mythical story is usually a good idea. Adolf Hitler spread the “big lie” that the Jews would destroy Germany and must therefore be expelled; the “Brexiteers” delight in the myth that the UK is being swamped by immigrants from Europe when in fact they are essential to maintaining public services. The list goes on.

When politics and religion combine

When politicians hold fast to religious myths they add an extra dimension of confirmation that becomes almost impossible to break.

There is no better example of this than the situation in the Middle East, where the rights of the State of Israel are given far more credence in the West – especially the United States – than those of the Palestinians who had occupied the land of Palestine long before the foundation of modern Israel in 1948.

The myth in question is that of the expulsion of the Jews in 70 AD by the Roman Emperor Titus. It is said that the Jewish nation was scattered across Europe and elsewhere by the Romans and their “right to return” was paramount, because of the sacred link between the people and the land.

(The Destruction of the Temple of Jerusalem, by Nicolas Poussin)

However, a closer examination of the facts calls this scenario into question. There is no evidence that the Romans expelled the Jews from Palestine, although it is quite possible that some elite members of Jewish society decided to leave after the destruction of the Temple in Jerusalem. The Romans did not expel whole populations when they conquered a territory – it would hardly have been in the interests to do so.

A far more likely scenario is that the vast majority of the Jewish people stayed put and endured Roman rule, much as they had done in earlier times. The descendants of these people were subject to conquest in later centuries by the forces of Islam and many would have converted to the new religion. In other words, today’s Palestinian Arabs are far more likely to be the true inheritors of the land that comprises modern Israel.

The vast majority of Jewish people today cannot claim descent from anyone who ever lived in Biblical Palestine – almost all their ancestors were converts to Judaism outside the Middle East.

However, that story does not fit the myth of a Jewish diaspora with a God-given right to occupy the land of Israel, especially as the myth has the backing of governments across the world.

What matters most to people is what they take most comfort in believing. In other words, a comfortable myth will always take precedence over a troublesome truth. Only when they stop believing will their beliefs – religious, political or whatever – be recognized as the myths they usually are.