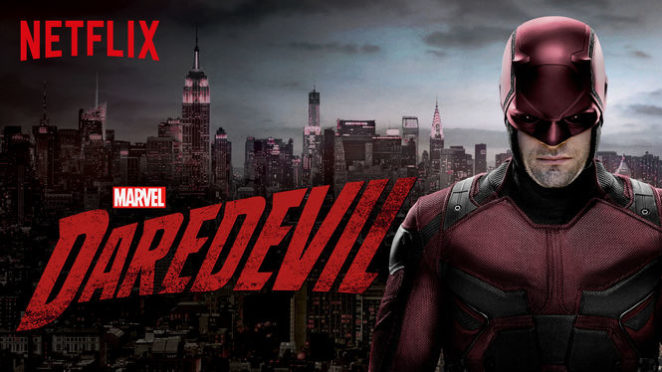 Marvel’s Daredevil, is a 2015 Netflix web series.It is  created by Drew Goddard, based on the Marvel Comics character of the same name. This series has won 3 awards, 1 prime time Emmy nomination, and 14 other nominations.  Set at the MCU (Marvel Cinematic Universe) that shares continuity with the films of the franchise, and the first series of shows that will lead up to The Defenders crossover miniseries, where Iron Fist, Luke Cage and Jessica Jones will join the league. Daredevil is a two-season web series with 13 episodes each. This series had been into film on 2003 with Ben Affleck playing the role of Daredevil.

Charlie Cox (Tristan Thorn of Stardust) plays the role as Matthew “Matt” Murdock, a blind lawyer-by-day who fights crime and as a vigilante at night. Matt Murdock was raised in the Hell’s Kitchen of New York City, by his father, boxer “Battlin” Jack Murdock. He’s a hero who has strange abilities (even though he’s blind) like super hearing that he can hear everyone’s heartbeat or any noises at wide ranges. He can tell if someone is lying by sensing the heart pulses. He has stamina and good at fighting even without his techie long rod.

Also in the cast were Deborah Ann Woll (Jessica Hamby of True Blood) as Karen Page, a young woman whose quest for justice sends her crashing into Murdock’s life; Elden Henson (Pollux of The Hunger Games: Mockingjay) as Franklin “Foggy” Nelson, best friend and law partner of Matt; Rosario Dawson (Gail of Sin City) as Claire Temple, a nurse who helps Matt, who also has crossover roles in Luke Cage, Iron Fist, and Jessica Jones web series as their nurse too.

In Season 1, Vincent D’Onofrio (Edgar of Men In Black) played as the main antagonist in the series as Wilson Fisk aka Kingpin, a powerful businessman whose interests in the future of Hell’s Kitchen brought him into conflict with Murdock and Daredevil; and Scott Glenn (Ezra Kramer of The Bourne Ultimatum) as Stick, a blind man who trained Matt the art of combat since he was just a boy, and at the same time he trained also the young girl named Elektra, whom he wanted to kill lately for she was destined to be the Black Sky which Nobu aka The Hand wanted her to be.

In Season 2, lots of vigilantes and strange antagonists appeared including the aforementioned Elektra (last named Natchios) played by Elodie Young (Hathor of Gods of Egypt), a dangerous and mysterious woman from Murdock’s past. This character has been filmed by Marvel way back 2005 where Jennifer Garner played the role. Another vigilante appeared at this season was Frank Castle aka The Punisher, a  notorious vigilante known to kill those criminals without mercy. He was played by Jon Bernthal (Shane Walsh of The Walking Dead). Punisher will also has his own web series this year as ordered by Netflix last April, with Bernthal himself reprising the role. Also in the cast that has crossover roles were Hong Kong national actress named Wai Ching Ho as Madame Gao (Chinese woman in The Sorcerer’s Apprentice), a very powerful old Chinese woman who runs her own trade of heroin in Hell’s Kitchen). She appeared too in Iron Fist and will be reprising her role at The Defenders crossover series. Japanese actor named Peter Shinkoda has crossover role too, playing as Nobu aka The Hand who is one of the main protagonists in the Iron Fist series. He’s dying to capture Elektra in this series to fulfill the fate of her as the powerful Black Sky.

This series has been one of the most successful hero’s introduction by Marvel. It’s an epitome of Matt Murdock’s life story how he all started and became a fighter for justice. Truly and very well organized twists have been packaged for this series. If you’re an avid fan of Marvel superheroes, you should start with this one. Daredevil will really help you realize that justice is not just served through killing criminals. For him being a vigilante, is not to kill the criminals, but to enlighten the darkness that cover their dark sides — they should deserve second chances. That’s how humane our blind lawyer hero here (though his code name sounds evil) as The Devil in the Hell’s Kitchen aka The Daredevil.

So would you dare to follow him and his bright side ideas as a vigilante who gives mercy to his enemies?