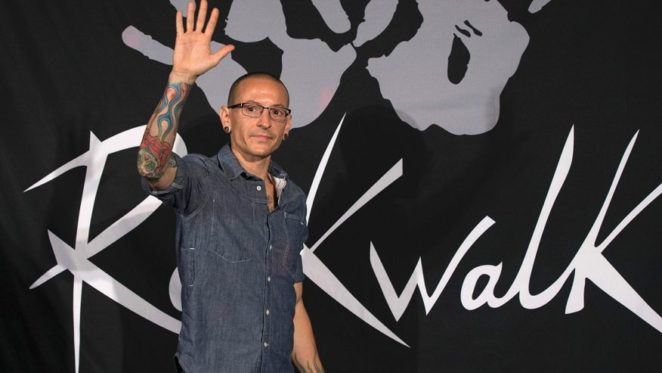 Linkin Park has been one of my favorite rock bands during my high school days. It’s been a giant to music industry. They made original hits into musical signatures like “In The End”, “Numb”, “Breaking The Habit”, and a lot more. Aside from Mike Shinoda, what makes a Linkin Park more fortunate in their journey to musical fame, is their frontman Chester Bennington, who sings with passion as a rock vocalist and frontman. Just then lately, on 20th of July, 2017, he was found out dead at his room hanging, obviously speculating for a successful suicidal attempt at an age of 41.

According to TMZ, he allegedly hanged himself and found dead in a private residence in Palos Verdes Estates in Los Angeles County at 12 p.m. The gossip site reported that the singer had previously talked about suicide as the result of childhood trauma and abuse while struggling with drug and alcohol addiction.

Bennington wrote an emotional letter to his friend and Soundgarden singer Chris Cornell after he committed suicide and died last May. In it, he touches on his grief, how he inspired him, and how he felt Cornell was “saying goodbye in your own way”.

I dreamt about the Beatles last night. I woke up with Rocky Raccoon playing in my head and a concerned look my wife’s face. She told me my friend had just passed away. Thoughts of you flooded my mind and I wept. I’m still weeping, with sadness, as well as gratitude for having shared some very special moments with you and your beautiful family. You have inspired me in many ways you could never have known. Your talent was pure and unrivalled. your voice was joy and pain, anger and forgiveness, love and heartache all wrapped up into one. I suppose that’s what we all are. You helped me understand that. I just watched a video of you singing “A Day In The Life” by the Beatles and thought of my dream. I’d like to think you were saying goodbye in your own way. I can’t imagine a world without you in it. I pray you find peace in the next life. I send my love to your wife and children, friends and family.

It seems like mostly rock icons committed suicide. From Doug Hopkins of Gin Blossoms, Kurt Cobain of Nirvana, Joel Rundell of Better Than Ezra, Michael Hutchence of INXS, Tommy Marth of The Killers, Bob Welch of Fleetwood Mac, Chris Cornell of Soundgarden (Chester’s musical buddy), and now Chester himself caught as one of the victim’s of successful suicidal attempts. It’s saddened but, these famous figures in rock industry may be poor at handling depressions and struggles in life, but we still thank them and pay tribute coz they were still once influenced us to believe in their passion when it comes to music. They might ended up at their worst downfalls, but they were still legends to be forgotten in the history of rock music.

Since the news of Bennington’s death, the band has posted tribute photos of him to its social media pages. Chester Bennington  will forever be known and be recognized as one of the leading pioneers of the nu-metal genre.