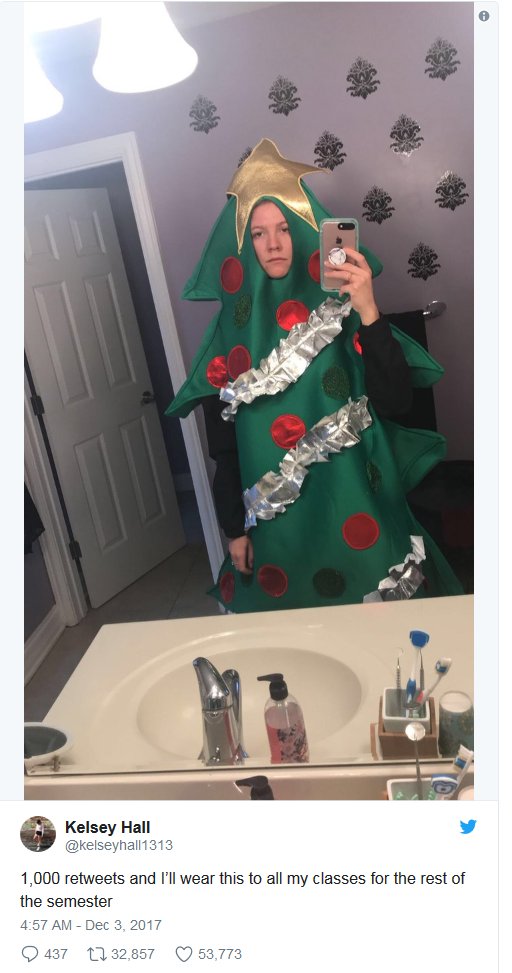 Be careful what you wish for, lest it come truehttps://t.co/mevSNcj4Rs
Student wearing Christmas Tree, challenges for 1000 RTs to wear the Xmas costume for the whole semester. Result? 33K RTs and #twitter itself participating along! Greatest Regret Ever.. or Not? pic.twitter.com/VFsqtB7YnH

To make the long story short…

A young girl with a sense of humor, uploaded on twitter an image of her in a Christmas Tree outfit.

She posted that if she could get 1000 retweets, she would make a fool out of herself, wearing the costume for the rest of the semester (luckily ending soon)

Not only one thousand, but (till now) 33 thousand retweets were done to her tweet (where no hashtags were used)

Of course she now regrets it, having to wear the christmas tree (lol) for a few more days but she has become famous all around, as twitter itself has tweeted about it, inviting people to RT it!!

Thank God the girl’s got plenty of humor as she is making fun, wearing the costume and pleasantly is posting about it!

Be careful what you wish for, lest it come true.

Always have a sense of humor, don’t take things too seriously.

Always find a reason to smile, or make others smile!

Would love to have your thoughts on it.