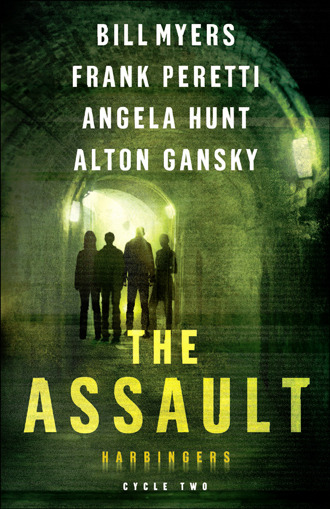 I am reviewing a copy of The Assault through Bethany House Publishers and Netgalley:

Disclaimer: The Assault is the second cycle in the Harbingers series, I recommend reading The Invitation first.

In the first story The Revealing by Bill Myers the team is in Rome trying to find the mystical spear that Hitler had once owned, the spear that had pierced Christ’s side.  They find themselves in the catacombs under the city, and the hidden chambers of the vaticans, and finally in a mysterious seaside cave.  The cave has powers that no one expected.

The first story draws you in, and does not let you go, making you want to continue on without stopping.

In the second story of this cycle Indestation by Frank Peretti a microscopic evil is unleashed on the world, an evil out to destroy humanity. In this story the team finds themselves having to confront a monster out to kill mankind.

The third story is The Infiltration by Angela Hunt, the team finds themselves wounded and splif up.  The team is having to see a psychiatrist which Andi does not like.

In the final story of this cycle is Alton Ganksy’s a supernatural mist unlike anything other is unleashed.  A fog that can kill anything they find.

In this book four prolific Christian authors come together to create a stories that remind us of how good triumphs over evil.  Bill Myers, Frank Peretti, Angela Hunt and Alton Ganksy have prolific careers in their own right and are amongst the top authors in the Christians genre.

I gave The Assault five out of five stars,