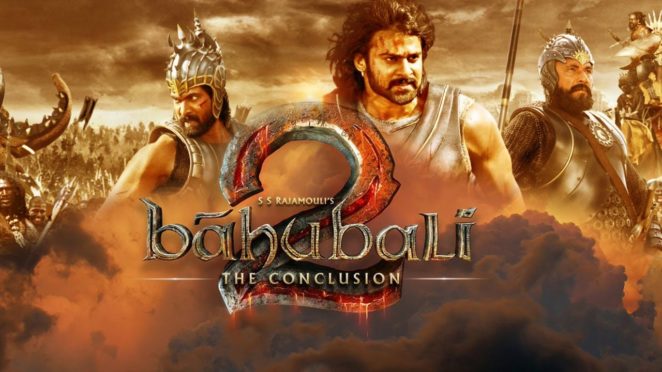 Baahubali 2: The Conclusion is a Tollywood (The Indian Telugu-language film industry based in Hyderabad, Telangana) movie that is a continuation of Baahubali: The Beginning, that takes place before and after the events of this first part of duology movie series. It was originally made in Telugu and Tamil, and dubbed into different languages (i.e. Malayalam, Hindi, German, French, Japanese, and English). Baahubali means “The One With Strong Arms”. Also known as by the initial BB2, Baahubali 2: The Conclusion is a 2017 Indian historical fictional film that one should not miss to watch, for it is directed by one of India’s top movie directors named S.S. Rajamouli.

This movie was premiered at British Film Institute, and it was the inaugural feature film presented at the 39th Moscow International Film Festival. It was released theatrically worldwide on April 28, 2017 for over 9000 screens, and was estimated close to 200 screens were upgraded to 4K projectors before its release.

Baahubali 2: The Conclusion is the story of Mahendra Baahubali, played by Prabhas. Mahendra is also known by an alias Sivudu (Telugu) or Shivu (Tamil). He is the son of Amarendra Baahubali, son of Maharaja Vikramadeva, born in Mahishmati kingdom, and was raised by his foster mother who at the same time his aunt Rajamatha Sivagami, who named him Baahubali. This movie has lots of characters that I can’t barely introduce them all, plus you might not understand very well if I’m going to name each character here. So I would rather advice to better watch this film to fully acquaint their names.

From a production budget of 250 crore rupees ($39.3 million), this movie got a whooping box office income of 1917.52 crore rupees ($306.8 million), which is nearly 8 times from its production budget. This movie is certainly one of my personal favorites from India, long before I have watched Three Idiots, Ghajini, and Taare Zameen Par (Every Child is Special). Indeed, it’s very worth to watch movie. It can even tantamount to Hollywood movies. With a running time of 171 minutes (2.85 hours) plus musicals, this movie deserves to be watched by movie fanatics. I have watched this and certainly enjoyed convincing graphics and undeniably world-class effects and film quality. The story plots and twists are also flabbergasting , how screen writers would connect the story from past to present that will certainly gape your mouth for an awe. For me, this is more than a Lord of the Rings movie but less than a bit from Star Wars. Guys, I really strongly recommended this movie a tenfold.

Indeed, India is really world class when it comes to movies. They got my respect. This is one of India’s finest movies ever released in this century. This is really history! Congrats!