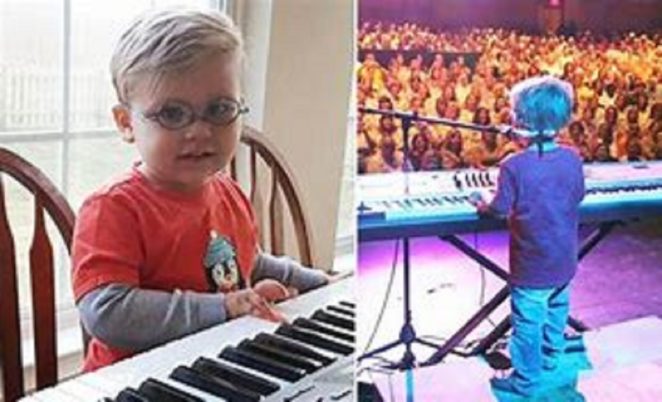 AveIf there is one amazing thing I have learned about six year old music prodigy Avett Ray Maness is that despite the fact that is blind in one eye with a visual impairment in the other eye is that he has the musical gift of admiring classic music since he was born in Dayton Ohio.

I have seen television ads stating that young children who listen to classic music and uplifting music have better chances of developing into smart young children as they grow up into the age of accountability.

Sara Moore who is the mother of Avett knew that her son has a gift for music when he was one year old when he played a children’s tune called “Twinkle Twinkle Little Star” on the piano.

I do not know if Avett has any relatives in his family tree that has musicians. Maybe it is his gift from God to learn how to play classical music as well as music from the Rock And Roll era and today’s pop musicians to the delight of concert goers who attend his shows in the Dayton area.

Since we are in the era of You Tube and other social media outlets, Avett has the potential to be the next musical superstar in the near future.

Hopefully Avett will remember the saying from the late Casey Kasem who was the former host of “America’s Top 40” when his final comments on his radio show were “Keep your feet on the ground and keep reaching for the stars.”