The Austro-Hungarian note to Serbia, stating what the state should do in the investigation into the assassination of Sarajevo, was handed over by deputy Baron Vladimir Fon Gizl on July 23, 1914 in the afternoon to the representative of Serbian Prime Minister Lazar Pachuu, Minister of Finance.The response was requested, as it explicitly stood in the document, within 48 hours.The Vienna deputy handed the ultimatum to Serbia. 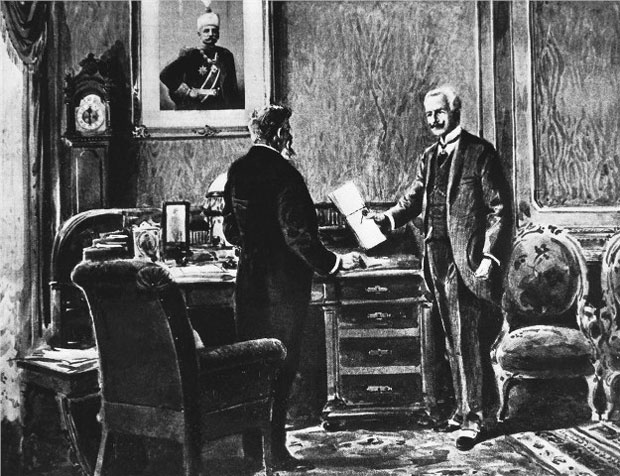 In document, Serbia, was not directly charged with organizing assassinations in Sarajevo, but stated that it “tolerated the machinations of any societies and associations targeted against the Monarchy, the illicit language of the press, the glorification of the perpetrator misdeed, the participation of soldiers and officials in subversive agitation”.Here is what was asked from Serbia in the document:

1. To prevent edicion of publications that incite hatred and hostility towards Austro-Hungarian.

2. To immediately dissolve the organization “National Defense” and other organizations participating in the propaganda against the Austro-Hungarian Empire.

3. To remove from public education everything that could serve or serve to promote propaganda against Austro-Hungarian.

6. To take legal action against the accomplices of the Sarajevo assassination who are on the Serbian territory, with the help and instructions of the Austro-Hungarian authorities.

7. To be arrested immediately to immediately arrest Vojislav Tankosic and Milan Ciganovic (persons involved in an assassination attempt carried out preliminary by Austro-Hungarian).

8. To prevent “aiding illegal trafficking of arms and ammunition across the border” and to “release and severely punish” those border authorities that helped the three assassins cross the border.

9. To send the Austro-Hungarian explanation regarding the statements of senior Serbian officials in Serbia and abroad who expressed hostility towards Austro-Hungary.

10. To inform Austro-Hungarian for fulfilling these obligations without delay.

The text of the ultimatum is not immediately revealed to the European powers.When the world finally saw this document, the weapon already sounded in the Balkans, and there was no reaction time.British Secretary of State for Foreign Affairs, Sir Edward Gray, told the Austro-Hungarian ambassador that it was “the most horrible document that a country has ever delivered to another state”.

Of ten requests, Serbia accepted everything except one, point 5, which would mean the arrival of Austro-Hungarian investigative judges and police officers to Serbia to conduct an investigation into its territory.The government of the kingdom made the greatest possible concessions, but nevertheless at the time when they made up the answer they knew what the reaction of the Austro-Hungarian would be.Minister of Education Ljuba Jovanovic said,,”There is nothing left than to die,,..Serbian dispatch was sent on July 25th. The Austro-Hungarian response came on July 28th. In a regular telegram, the news arrived that this emperor would announce the war to the Kingdom of Serbia. 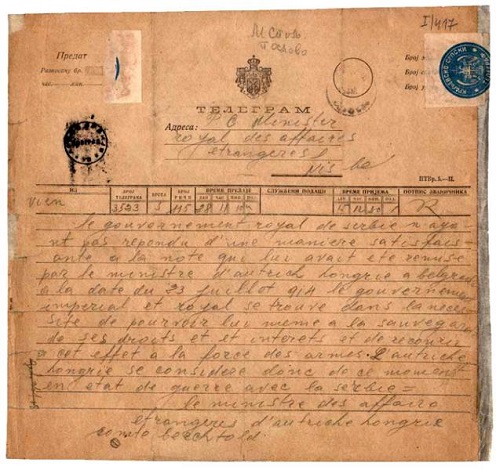 This conflict grew into World War I, the biggest and most bloodiest clash that the world has ever seen before. In addition to the destruction and chaos that was brought to war, Serbia “cost” a third of the population or about 1,247,000 soldiers and civilians. It was the biggest price of the Sarajevo assassination.