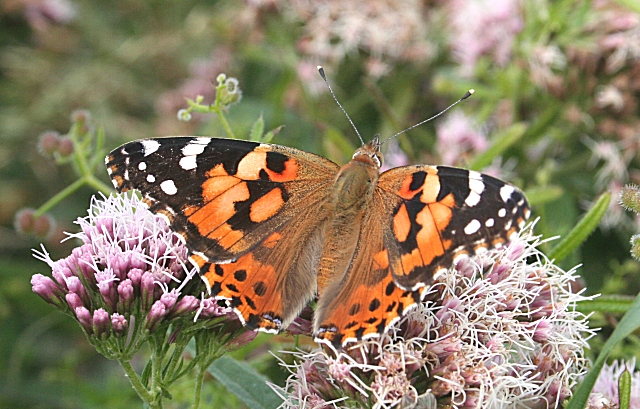 “The Butterfly Farm” is a 1982 poem by the Northern Irish poet Medbh McGuckian (born 1950). She is known for her distinctive use of metaphor to make incisive social criticism with a feminist flavour.

“The Butterfly Farm” comprises four three-line unrhymed stanzas, which are initially challenging but which start to fall into place once it is appreciated that metaphor drives just about every line.

The film of a butterfly ensures that it is dead:

Its silence like the green cocoon of the car-wash,

Its passion for water to uncloud.

In the Japanese tea house they believe

In making the most of the bright nights:

That the front of a leaf is male, the back female.

There are grass stains on their white stockings;

In artificial sun even the sounds are disposable;

The mosaic of their wings is spun from blood.

Cyanide in the killing jar relaxes the Indian moon moth,

The pearl-bordered beauty, the clouded yellow,

The painted lady, the silver-washed blue.

Most readers probably think of a butterfly farm as a place where exotic and colourful butterflies are bred and displayed for the enjoyment of a paying public. However, this poem seems to be all about dead butterflies and the method used to kill them. This is butterfly farming in the same sense that Victorian baby farming often led to the deaths of the babies (unwanted children who were quietly disposed of).

However, the “butterfly” metaphor becomes clearer with the second stanza and its “Japanese tea house”. The clarity is probably greater for devotees of Puccini operas who will appreciate the reference to his tragic Japanese geisha who is nicknamed “Madame Butterfly”. The butterfly thus becomes symbolic of delicate and vulnerable womanhood, and the somewhat surreal likening of the silence of a dead butterfly to “the green cocoon of the car-wash” can be seen as the worlds of the male and the female being brought into stark contrast but having the “cocoon” in common.

The proprietors of the Japanese tea house see the division between male and female as being sharp and distinct, expressed in terms that relate to the natural world: “… the front of the leaf is male, the back female”. However, this division is exploited for material gain (“making the most of the bright nights”), just as the butterfly farm exploits (and kills) its butterflies to make a profit.

It is also an artificial division, as symbolised by the formality and ritual of the Japanese tea ceremony, because it is created by a human belief system that determines how society will operate in cultural terms. The artificiality works to impose certain practices on women that only create beauty at a superficial level (“the film of a butterfly”), but the reader is reminded that “The mosaic of their wings in spun from blood”.

The final stanza makes clear the link between beautiful but dead butterflies and their human (i.e. female)counterparts, and uses the word “relaxes” (in “Cyanide in the killing jar relaxes …”) in a cynical way to describe how the cessation of movement in death can be likened to cessation of rebellious feelings in women who are trapped in a male world that sets the cultural standards that women are expected to live up to.

The poem ends with a list of butterfly species that can also be descriptive of certain types of woman, seen through male eyes. Hence: “The pearl-bordered beauty, the clouded yellow, / The painted lady, the silver-washed blue”. Just as the butterflies can end up pinned on a card in a butterfly farm, so can their female “Madame Butterfly” equivalents be “pinned” and categorized in a world run according to male morality and in which surface beauty is prized above more lasting qualities. The metaphor of Puccini’s opera, in which Butterfly spears herself with her father’s ceremonial sword, may be what the poet had in mind here.

“The Butterfly Farm” is a poem that makes a savage criticism of how the artificiality of relations between the sexes in the modern world is driven by the profit motive, and is also a plea for women not to play the role that male-run society has determined for them. The cocoon of the second line should be the birthplace of the butterfly which then seeks its freedom, but instead it is a place of suffocation in which only male desires are met (as symbolised by the car-wash with the implication that cars are objects of mainly male desire). It is not an easy poem to understand at first reading, but there are levels of complexity that can be revealed on subsequent readings as new interpretations of its symbols and metaphors become apparent.