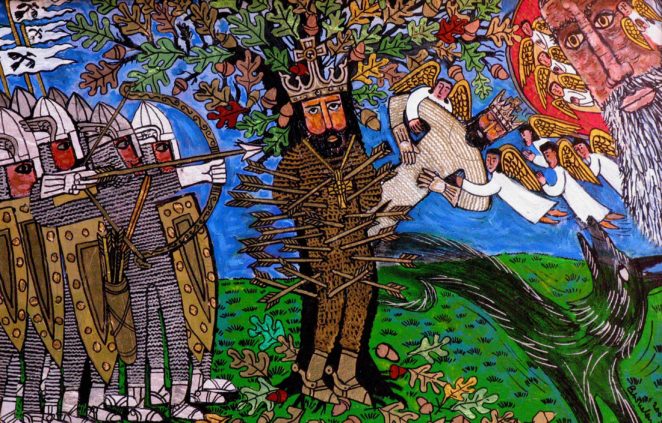 20th November is the saint’s day of Edmund the Martyr, the only English monarch to be declared a Christian martyr until King Charles I in 1649.

According to the traditional account (which has been disputed) Edmund was only 14 in 855 when he was declared king by the leading men and clergy of Norfolk, who were soon joined by those of Suffolk, thus making Edmund the undisputed king of East Anglia (the Angles had accompanied the Saxons in their invasion of England after the withdrawal of the Romans).

Edmund proved to be devout as a Christian and a just ruler, modelling himself on King David of the Old Testament. 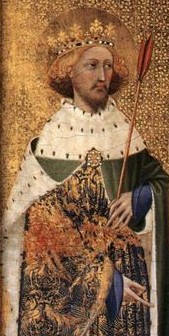 However, after only ten years of peaceful rule, a major threat arrived in the shape of the Danish “Great Heathen Army” that landed in Suffolk in 865 and proceeded to sweep northwards, taking York in 866. They then moved southwards again, arriving in East Anglia in 869.

Edmund was killed in the battle that ensued, although a later tradition claimed that he was captured by the Danes and executed after he refused to renounce his Christian faith. A number of artworks portray him being shot with arrows after having been tied to a tree.

The Danes then overran East Anglia, which would become part of the “Danelaw” that later kings of England were forced to recognise as being beyond their power to control.

Edmund came to be venerated after his death, including by the Danes who overthrew him. Coins have been discovered that circulated in the Danelaw and bear Edmund’s image.

Edmund’s remains were eventually buried in a shrine at what was originally called St Edmundsbury but is now more usually known as Bury St Edmunds. (The comic writer Clement Freud once named a racehorse “Dig Up St Edmunds”, but that’s another story!)

The shrine of St Edmund came to be a place of pilgrimage that was visited for several centuries, bringing considerable wealth to Bury St Edmunds Abbey. However, the shrine was destroyed in 1539 as part of the Dissolution of the Monasteries under King Henry VIII.