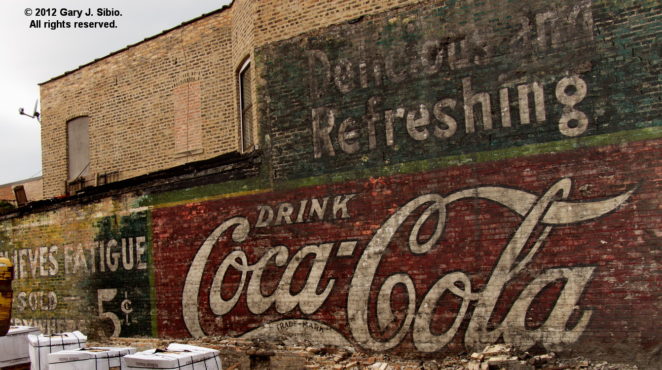 While I was out running errands one afternoon, my wife called me and told me that they had torn down a building near where I was and had revealed and old Coca Cola sign. The sign had been painted on the side of one building but was covered up when another building was built next to it. That building had been torn down revealing the old sign. Old signs painted directly on a wall such as this are known as ghost signs. If you look around, you will probably find similar signs near you.

This ghost sign is on the building at 5438 North Clark Street in Chicago, Illinois. That building the sign is on was built in 1911. The building which was torn down was built in 1919 which gives us an 8 year range during which the sign must have been painted. (The actual window is probably a year or two less since they would not be likely to put up a sign if they knew it was going to be covered up in the near future.) Unfortunately a new building has been built where the old one was torn down so the ghost sign is no longer visible.

Note that the sign says that Coca Cola relieves fatigue. Undocumented claims like this were common at the time. Also note the 5¢ price. When Coca Cola was introduced in 1886 most soft drinks sold for 7¢ or 8¢ for a 6½ ounce glass. Pemberton, the drink’s inventor, undercut the competition. Over time the company wanted to raise the price of their drink but they ran into a problem. Vending machines were not reliable at making change. Coca Cola tried lobbying Congress to mint a 7½¢ coin. Congress refused and the price stayed at 5¢ until the 1950s when vending machines became reliable at dispensing change. The price went up to 10¢ not that you need to make change for that amount either.The photo of the sign was taken with a Panasonic DMC-FZ50 camera. I then used ACDSee Ultimate 10 to straighten out the image and adjust the lighting.