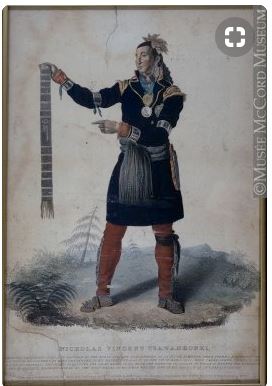 The Hurons-Wendats First Nation (of which there is an old print above of a Canadian Wendat) formed a confederation of five nations who spoke the Iroquois language. They occupied the North side of the actual Simcoe county in Ontario, Canada until they were chased from it by the Haudenosaunee or Iroquois around 1650. The Hurons-Wendats were then assimilated with other nations although some of them retained their first identity. In Canada, their descendants live for the most part in the reserve of Wendake near Quebec City in the province of Quebec where some 1,100 out of the 2,873 Hurons-Wendats that are left reside.

The French gave the surname of “Hurons” to the Wendats because it is derived from the french word “hure” which means “boar head” or “shaggy or tousled hair” or even “spiked or ruffled hair”. “Hure” is an old French name and is not used as much today. The reason for that name comes from the fact that Hurons, generally, have coarse black hair which they wore in a mane extending from their forehead to the nape of the neck and which they decorated with a stiff headdress of some sort. But, actually Wendat (Ouendat) is the original name they called themselves and it means in English “the island people” or “the peninsula people” although they were called the “serpent people” by the Algonquin First Nations. The “Hurons” were also the First Nations which inspired Jacques Cartier and his crew to name our country “Canada” from the name “Kanata” that he heard from the chief Donnacona (a Huron-Iroquois) as I explained in my earlier post “The origin of the word “Canada” (my country)”. By that time, in 1534, there were already some “Hurons” which had established themselves in today’s province of Quebec although at that time there were no borders between Quebec and Ontario.

But we have to remember that as the Chief Nicolas Vincent Tsawenhohi (1771-1844) noted to the Assembly of Lower Canada that the “Hurons-Wendats” were, before the arrival of the Europeans, the “masters of the country”(as he phrased it) and this, from the Saint-Lawrence River to the Great Lakes region. In fact the confederation of the “Wendats” was formed by the “Attignawantans” (people of the bear), the “Attignaenongnehac”(people of the cord), the “Arendaronons” (people of the rock), the “Tahontaenrats” (people of the deer) and the “Ataronchronons” (people of the marsh). All these tribes were qualified as “nations” by themselves which underlines the fact that they were separate distinct political and territorial entities but with similar cultures but not completely identical. The people of the bear and the cord were the first inhabitants that occupied the Saint-Lawrence and Great Lakes region. At the end of the XV1 century, the other three nations left the northern riverside of Lake Ontario and the Quinte Bay regions to join the bear and cord nations to form a defensive alliance against their common enemy that were the five “Haudenosaunee” tribes that were located at the south of Lake Ontario.

At the beginning of the XV11 century, there were approximately 20,00 to 25,00 “Hurons-Wendats” but from 1634 to 1642 their numbers dropped to 9,000 due to epidemics, especially measles, flu and smallpox brought by the Europeans. They were mostly sedentary First Nations and their economy at that time was based on cultivation of corn, beans, squash and also on fishing. They were as such “horticulturalists”. Hunting was a minor activity except in autumn and winter where it is then very well practiced but way beyond the borders of the “Hurons-Wendats” territory. At the time of the first contact with the Europeans colonists at the beginning of the XV11 century, these First Nations farmers occupied approximately an 880 square km territory which they called “Wendake”. The most important villages were fortified with a wooden palisade and usually located on a higher site near a permanent water source and also close to arable land suitable for agriculture such as it was. The “Wendats” usually moved from one site to another about every 10 to 15 years after the soil was no longer cultivable and the surrounding firewood totally gone.

The “Hurons” villages were not only made up of wigwams or tepees. These villages or rather towns could cover from one to ten acres of land. They also were made of several “longhouses” usually made from birch bark. Some of these “longhouses” were anywhere from 200 feet long (60.96 meters), 20 feet wide (6.096 meter) high and wide. They had a rounded roof, were windowless but had two openings at the front and back. They could house as many as 20 “Hurons” families which explains the rapid spread of diseases and epidemics that came along with the Europeans arrivals.

The “Wendats” formed monogamous nuclear families that followed rules of matrilineal descent and inheritance. As with all the other Iroquois First Nations, the fundamental socioeconomic unit was the extended matrilineal family composed of some nuclear families that had in common a mother or a grandmother that took care of everyday affairs. The extended family lived in the “longhouse”. There were eight matrilineal clans. The members of a same clan thought of themselves as descendants of a common legendary ancestor (bear, deer, turtle, beaver, wolf, loon, sturgeon, falcon or fox). Belonging to a clan comes from matrilineal descent. Members of a same clan are forbidden to marry between each other. For instance, a child cannot marry a member of his mother’s clan but is authorized to marry a member of his father’s clan. This clan system was strong due to the fact that the members of a clan, wherever they lived often helped each other when they were in need or during wars. Two councils took care of the welfare of the village or town, one concentrated on the civil affairs while the other one took care of warring affairs. All the males over 30 years of age were members of these councils. In principle, all decisions were made through consensus but in reality the older males and the elected chiefs had a tendency to impose themselves and their decisions due to theirs status within the “Wendats” community and also because of their oratory prowess. Contrary to the “Iroquois” older women, the “Wendats” women had little to no right to talk during counsel meetings.

Although the “Hurons-Wendats” First Nations seems to be always farming or hunting or warring or building, they had time for play. One of their game is still played today and is called either “Stickball” or “Lacrosse”. The game is played in teams. The “Hurons” players use either a wooden or a hide-made small ball which they throw from a stick which has a net attached at the end of it. The purpose of the game is to score a goal by throwing the ball through the other team’s goal. “Lacrosse” is one of Canada’s national sports still to this day.

Below is a picture of a reconstructed longhouse and a old “Lacrosse” stamp. 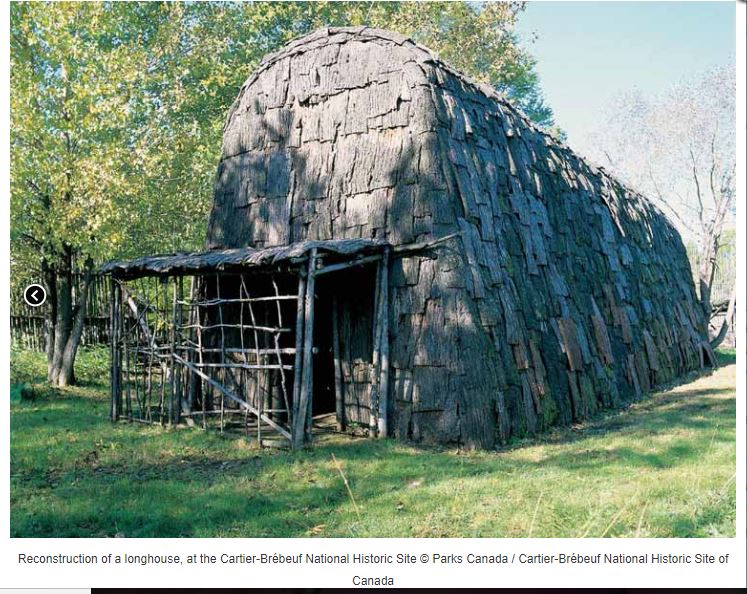 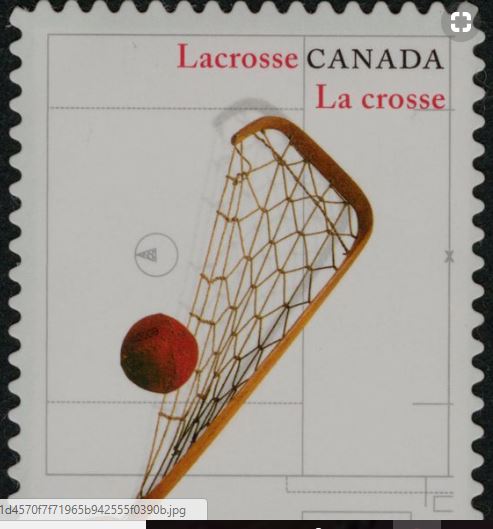