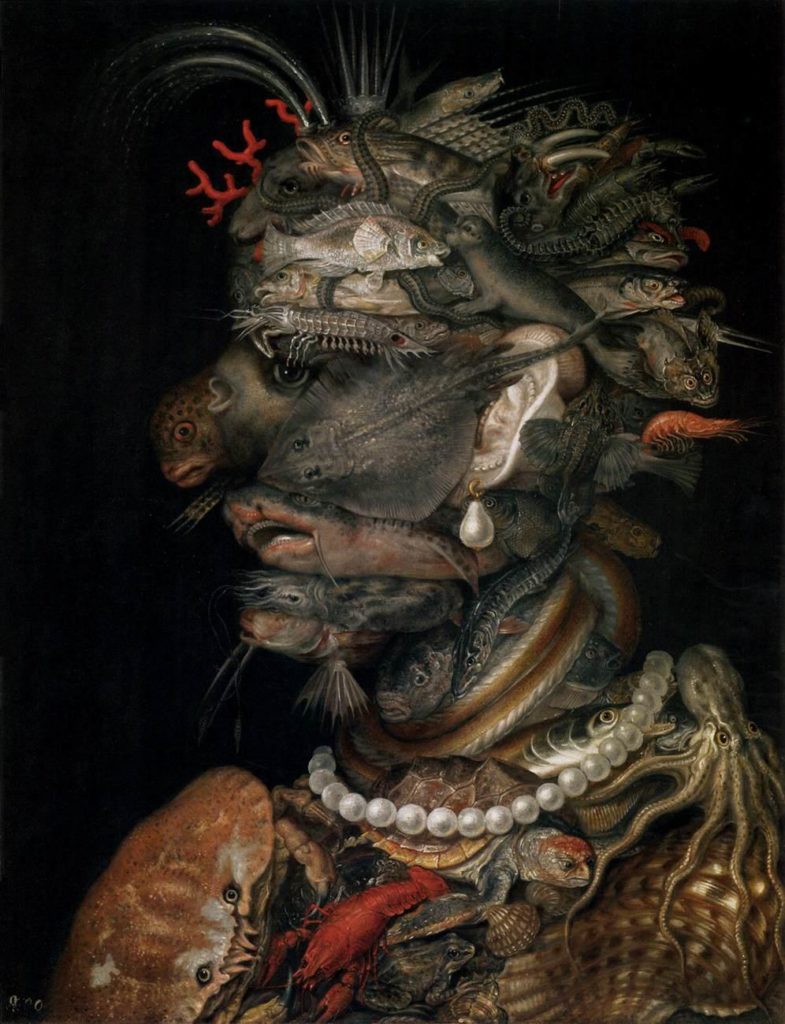 Giuseppe Arcimboldo was an artist from Milan who lived and worked in the sixteenth century, and was court painter to the Habsburg Emperor Maximilian II, followed by his son Emperor Rudolph II. Arcimboldo the court was called probably by Emperor Maximilian II, who especially appreciated the study of nature – especially rare species or strain; and since 1565 he is listed as one of the court painters. In addition to painting, the court was involved in organizing the ceremony, designing costumes and illustrations of rare plants and animals.

Although creating traditional images and the court dealt with the portrayal of members of the monarchy, Arcimboldo’s history remembered primarily as a painter of unusual portraits in which the figures presented through a combination of different elements – fruits, vegetables, animals, flowers, or everyday objects. therefore, interest in his work concentrates almost exclusively on the composite heads, their origin and interpretation Arcimboldo most famous creations are undoubtedly composite head. Seen from a distance, these portraits act normally, but approaching understand that painted by the various elements through which the painter composes a human head and upper torso.

For example – Picture year figure is made up of fruits and vegetables that grow in the summer, the picture of spring flowers, water of sea creatures, birds of the air, the earth of animals. These compositions Arcimboldo reached great popularity in the Hapsburg court and its reputation spread and the rest of Europe. Since the demand was high, Arcimboldo contemporaries were making copies – in the 16th and 17th century the word Arcimboldesque were called imitators of his work, as well as the genre. Reactions of contemporaries on Arcimboldo works were a mixture of fascination and attraction, since they encountered something quite different from what they are accustomed. In accordance with the time disappointed secret letters and puzzles – Arcimboldo spoke in riddles and metaphors, a constant theme of his painting moves from the detail to the whole, and vice versa, that is experiencing a metamorphosis.

However, Arcimboldo composite head can not be separated from its function of court artists, because they are among his first tasks at the court of Emperor Maximilian II the study of plants and animals – although the accumulation of different studies can not explain how they were finally gathered in the human head. It is known that among the scholars at the court circulated stuffed animals and dried plants,