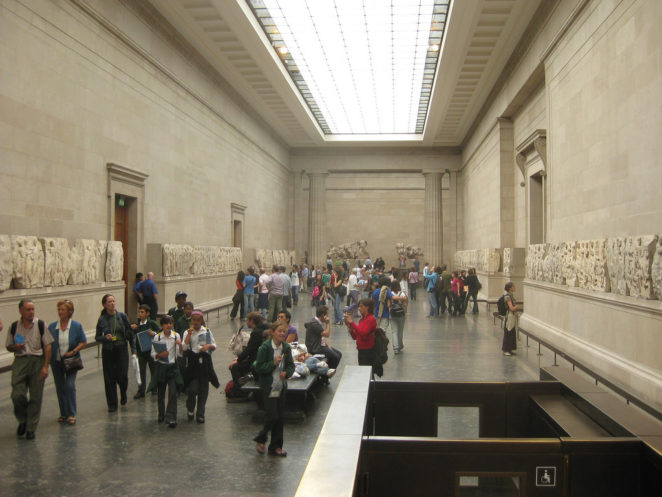 London’s British Museum is one of the world’s great treasure houses, containing more than 8 million objects, so you can’t expect to see them all in a day! That is why it is important to focus on what you really want to see, and here is one suggestion that might interest you. As with all the Museum’s permanent exhibits, it won’t cost you a penny to do so – although voluntary contributions are always welcome!

(The British Museum. The influence of Greek architecture is glaringly obvious!)

The Elgin Marbles is the name usually given to the Parthenon sculptures that were acquired in Athens (Greece) by Lord Elgin between 1799 and 1810 and bought by the British Museum in 1816, although Elgin brought back objects from buildings other than the Parthenon, and some of these can be seen elsewhere in the Museum.

There has long been talk about whether the British Museum should continue to house the sculptures, or if their rightful home is in Athens. Although it is unlikely that they will be returned to Greece in the near future it is possible at some stage, so if your visit to the British Museum is a once-in-a-lifetime event, the opportunity to see them should not be missed.

(The Parthenon, Athens. This shows clearly the areas that once housed the Marbles, namely the triangular pediment and the frieze just above the column tops)

The sculptures are housed in the Duveen Gallery (Room 18), which is on the extreme “left” of the building from the main entrance. The visitor with little time will therefore have to avoid the temptation to look at all the other treasures he or she will pass on the way!

Having reached the gallery, you could easily spend an hour or more taking everything in. What you have here is a huge collection of reliefs and three-dimensional sculptures that were carved in about 440 BC to adorn the upper walls and pediments of the Temple of Athene (known as the Parthenon) on the Acropolis at Athens. You can see these sculptures at eye-level, whereas the original viewers would have had to look far above their heads. The collection is far from complete, many pieces having been lost before Elgin’s time and others being housed in museums in Athens, Paris and elsewhere.

(These figures would originally have been on the Parthenon pediment)

You will be rewarded with a view of beautifully carved marble figures of men, women and animals. Some of these, from the frieze of the temple, represent a ceremonial procession that presents a picture of life in ancient Athens in considerable detail. Other pieces show scenes from Greek mythology, the most dramatic being of the battle between the Centaurs and the Lapiths. This is sculpture of the very highest quality which, even in its damaged state, for example with heads and limbs missing, cannot fail to impress.