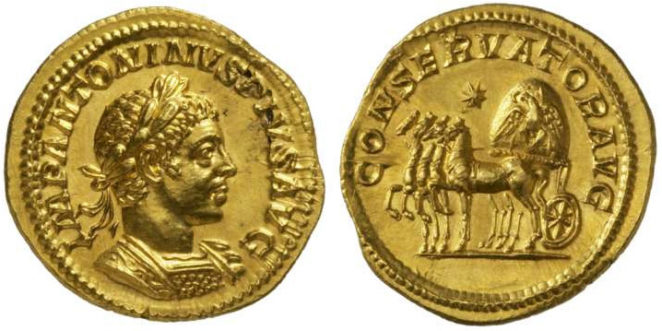 One would hardly expect many Roman emperors to make an appearance in a comic opera, but anyone who has seen “The Pirates of Penzance” by Gilbert and Sullivan might have been puzzled by the claim of Major-General Stanley that he can “quote in elegiacs all the crimes of Heliogabalus”. Even though the name is usually given as Elagabalus, not many opera-goers will know to whom he is referring, or what crimes he might have committed.

A young man from Emesa

Varius Avitus Bassianus (later known by the nickname Elagabalus) was born in 203 (or thereabouts) at Emesa in Syria. His father was a politician named Sextus Varius Marcellus and his mother was Julia Soaemias Bassiana, a member of the Severan family that had already produced two emperors, namely Septimius Severus and Caracalla, the latter of whom was Julia’s cousin.

Varius Avitus did not see himself as a future emperor. From an early age he had been the high priest of a religious cult that worshipped a Syrian sun-god named Elagabal, and that was his chief interest in life.

His mother and grandmother (Julia Maesa) had no time for his religious obsession but were far more interested in using him as a means of furthering their own ambition to restore the Severan clan to power after the imperial throne had been usurped by Macrinus, who may have been responsible for Caracalla’s assassination in April 217.

It so happened that Varius Avitus bore a passing resemblance to Caracalla, and the two Julias were quite happy to encourage the idea that he was the late emperor’s love child and therefore a Severan on both sides of his family. This was pure fiction, but it was enough to persuade the legion based in Syria to support the young man’s claim.

Macrinus declared war on the Severans but was defeated in battle and later captured and executed. This left Varius Avitus, aged 14, as Emperor of Rome with the new name of Marcus Aurelius Antoninus, which were also the real names of Caracalla.

The new rulers of Rome, namely Marcus, his mother and grandmother, did not proceed immediately to Rome but spent a year in northern Turkey. When they did at last move on they were accompanied by a large conical black stone that had been the centrepiece of the Elagabal cult at Emesa. The young high priest of Elagabal was determined to convert Rome to the new religion, and the black stone was essential to this aim. That is why he became known as Elagabalus.

As mentioned above, Elagabalus was primarily interested in religion and he devoted his energies to establishing a temple to Elagabal. He did this at first by extending an existing temple to Jupiter on the Palatine Hill, but also got to work on building a new one on the Capitoline Hill. This was opened with a massive ceremony in which the sun god was driven in a chariot to his new home, with the emperor walking backwards in front of it. Elagabal needed a partner, so the image of Vesta was moved from her temple in the Forum. Elagabalus followed suit by marrying a Vestal Virgin, but this marriage ended in divorce. Elagabal therefore also had to take a new wife, this being the sky goddess Urania.

While all this nonsense was taking place the real work of government was being done by the two Julias, with considerable efficiency. They were the only women in the history of Rome to attend meetings of the Senate.

The crimes of Elagabalus

His main crime in the eyes of the people of Rome was his hijacking of Roman religion. Taking a Vestal Virgin as his wife was sacrilege of a high order that could not be forgiven.

Although stories always grow in the telling, especially when the aim is to denigrate the character of an unpopular person, it does appear that Elagabalus indulged in all sorts of immoral behaviour, including carrying on with many women as well as his string of wives, none of whom pleased him for long.

Despite his massive sexual appetite and repeated marriages, Elagablus failed to produce an heir.

His grandmother, Julia Maesa, was aware that the Roman Senate and people could not tolerate the Emperor’s eccentricities for ever and that a violent end to his reign was possible if not probable. She therefore persuaded him that he should adopt as his successor his cousin Alexander Severus who, at the time of this move, was probably around ten years old. The older Julia would thus cement her own position should events turn out as she feared, in that one grandson might die but another become emperor in his place.

However, this plan did not suit the emperor’s mother, Julia Soaemias. She was well aware that her son was highly unpopular and she took the line that naming his cousin as heir would create a grave danger for Elagabalus – young Alexander did not share his cousin’s bizarre religious views and would be seen by many as a much better alternative that was worth committing murder for.

In March 222 Elagabalus and his mother made a fatal error. They went to the camp of the Praetorian Guard and ordered them to murder Alexander Severus. However, the guards had other ideas and promptly killed the young Emperor (still aged only about 19) and his mother and threw their bodies into the River Tiber. It is always possible that Julia Maesa had foreseen such an event and bribed the guards to do precisely what they did.

So ended the strange reign of Emperor Elagabalus, thus allowing that of the even younger Alexander Severus to begin. The cult of Elagabal came to an immediate end and the black stone was sent straight back to Emesa.