Flood myths are common in the mythologies of ancient civilisations across the world, and several theories have been put forward to account for why this might be so.

One such theory is that the release of large amounts of water at the end of the last Ice Age (at around 10,000 BCE) could have caused sudden catastrophic flooding as natural barriers were breached. This would have created folk memories that were subsequently passed down through many generations. Another theory is that such stories were invented to explain the presence of marine fossils and shells far above current sea levels (which are now known to be the result of geological processes over millions of years).

Whatever the reason, most of the stories have similar themes relating to the anger of a god and the saving of the only men and women who are righteous enough to be trusted to rebuild the human race after the rest have been wiped out. In Babylonian mythology (the Gilgamesh tablets) the lucky survivor is Utnapishtim, whose story is remarkably close to that of Noah in the Book of Genesis (almost certainly because the latter is a copy of the former). In Greek mythology the equivalent story is that of Deucalion and Pyrrha. 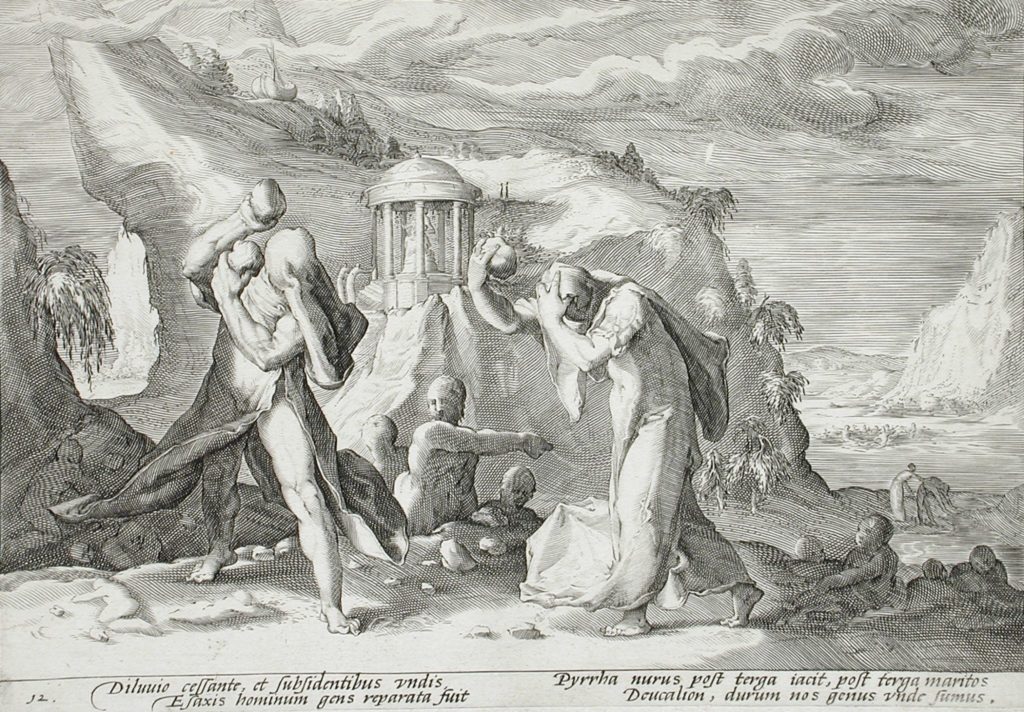 As is usually the case with Greek mythology, various versions of the story exist, told by such writers as Hesiod, Apollodorus or Homer. One version has it that Lycaon, king of Arcadia, tried to trick Zeus unto eating the flesh of a murdered child, but Zeus responded by destroying Lycaon and his family with a thunderbolt and then decided to destroy the rest of mankind by sending a flood, given that Lycaon’s wickedness was only symptomatic of the evil that pervaded everyone else.

The titan Prometheus got to know of Zeus’s plan and warned his son Deucalion, whose wife Pyrrha was the daughter of Epimetheus (brother to Prometheus) and Pandora, the first human woman. The couple stored enough food for nine days and nights which they placed in a large chest (or a ship, in some accounts). When the flood came they floated in the chest until it came to rest on Mount Parnassus.

Deucalion and Pyrrha were now the only mortals left alive, for which they gave thanks to Zeus and consulted the goddess Themis as to what they should do next (some accounts say that it was Hermes who conveyed instructions to them from Zeus).

Themis (or Hermes) advised them to throw their mother’s bones over their shoulders. They interpreted this as meaning the bones of Mother Earth, and they each picked up stones and threw them behind them. Every stone that Deucalion threw turned into a man and those thrown by Pyrrha became women.

As well as creating new humans in this way, Deucalion and Pyrrha had children of their own, most notably Hellen who gave his name to the Hellenes who occupied the land of Hellas, which is the name that the Greeks use for their country down to the present day.

Hellen’s sons and grandsons would become the founders of the four main branches of the Greek people, namely the Aeolians, Dorians, Ionians and Achaeans.

There is therefore another parallel between this myth and that of Noah, in that Noah’s sons, Shem, Ham and Japheth, would give their names to the Semites, Hamites and Japhethites respectively.