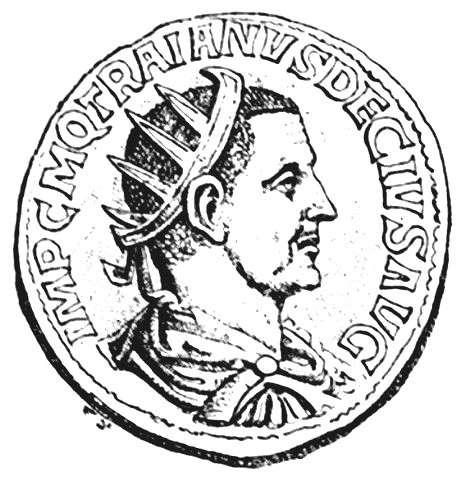 Decius was a short-lived Roman emperor who was notable for instigating a period of persecution of the growing sect known as Christians. He held a strong belief that the empire’s problems would be solved by focusing on what had served it well in past centuries, namely military might and devotion to Rome’s traditional gods.

Gaius Messius Quintus Decius Valerinus was born in around the year 201 in Pannonia, which covered parts of several modern countries including Hungary, Austria and Serbia. He was therefore defending his home territory when Emperor Philip (“The Arab”) gave him the task of seeing off the threat of Goths who were advancing across the Danube, which he did successfully in the year 249.

His troops decided that Decius would be a better emperor than Philip and persuaded him to “don the purple”. There is a suggestion that he was highly reluctant to accept, but that did not prevent him from marching towards Rome and meeting Philip in battle at Verona. Philip was killed and Decius became the undisputed emperor.

Decius celebrated his accession by pretending to be greater than he was. He did this by changing his name to Gaius Messius Quintus Traianus Decius in the apparent belief that he was a latter-day Trajan. A deeply superstitious man, Decius took to heart an ancient prophecy that a king

“will rule mighty Rome, skilled in war, emerging from the Dacians, of the number 300”

Decius was pushing the analogy to its limit, given that he was from Pannonia rather than Dacia, but he took the “number 300” to refer to the Greek letter Tau, this being the initial of Traianus, and Trajan had conquered Dacia at the beginning of the previous century, so perhaps Decius thought that he fitted as the fulfilment of the prophecy.

Decius took the decline of Rome to be due to general neglect of the ‘ancestral gods’ so his solution, begun in the year 250, was for all subjects of the empire to make formal sacrifices, for which proof was needed.The sacrifices had to be performed in front of officials, and evidence has survived of written declarations of sacrifice with the signatures of witnesses.

Not surprisingly, this demand did not go down well with Christians within the empire, with the result that the short reign of Decius was a period of religious persecution. Noted martyrs from this period, who were later recognized as Christian saints, included St Christopher, St Agatha and St Fabian, who had been an early Pope.

Despite all Decius’s efforts, the sacrifices did not provide the protection for the empire that he had anticipated. Goths continued to invade from the north across the Danube, added to which a terrible plague swept across the empire.

Decius spent much of his time in 250 and 251 trying to get to grips with the Goths, but this proved to be extremely difficult. Roman armies were used to fighting pitched battles, which they usually won, but these barbarian tribes refused to play by the rules. They preferred what today we would call “guerilla” tactics, namely carrying out sudden raids on unprepared units of troops, then retreating back into hiding before they were ready to strike again.

In 250 Decius’s army was ambushed, with severe losses, after which the city of Philippopolis (in modern Bulgaria) was laid waste. It was not until June 251 that Decius was able to catch up with the Goths, who lured the Romans into swampy terrain at Abrittus (in modern Romania) and destroyed them.

This battle, which is also known as the Battle of Forum Terebronii, was one that the Romans should have won. General Trebonianus Gallus failed to press home his advantage, which allowed the Goths to counter-attack. Gallus’s legions survived relatively unscathed but the rest did not. Decius and his son Hostilian were both killed, leaving Gallus to pick up the pieces and be declared the next emperor.