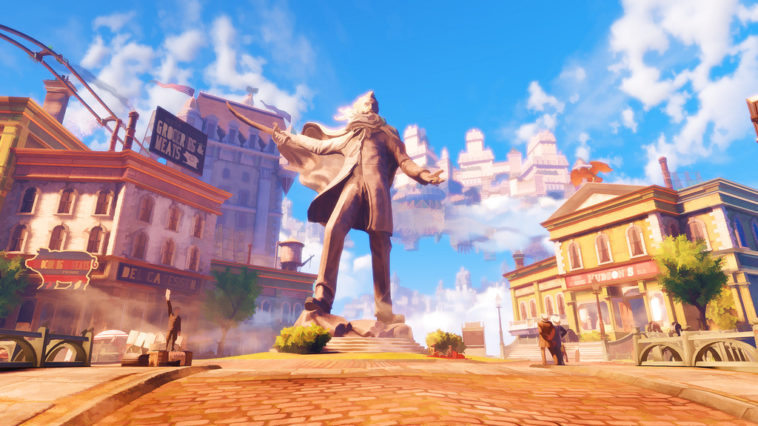 The state of cultural sensitivity in the gaming industry is best described as toxic. One of the most recent and effective examples of this state of the industry centers around one of the biggest selling and most positively reviewed games of 2013.

Irrational’s Bioshock: Infinite is set in the fictional city of Columbia, a nationalist “utopia” separate from the rest of the world, and holding tight to the slavery and racism typical of the period. This is characterization; the purpose is to make the setting seem vile, to give the player an excuse to massacre the countless soldiers acting as opposition for the story. The entire narrative concept of the game appears for all intensive purpose to be predicated on one very easily apprehended absolute truth: “racism is bad.”

It’s a positive message, to be sure, and one very hard to argue against in the real world. (Unless you worked in the White House in 2017, that is, but then the real world doesn’t seem to apply there in any way, shape or fashion January 20, 2017). Halfway through the gameplay, however, something far less positive and slightly more open for debate occurs: the oppressed slaves take over the role of the bad guys who enjoy all the benefits of authority and repeat the cycle of cultural insensitivity all over again. In the process, Bioshock: Infinite becomes painfully emblematic of the entire industry in which it inhabits by proving once again that video game designers seem almost genetically designed to transform even the simplest message of cultural sensitivity into an opportunity for the player to become a killing machine bent on genocidal carnage.

This focus on a single game is intended to further place the history of video games within a context from which it is possible to extrapolate assumptions that can be accurately applied to the industry as a whole. Infinite was a well-reviewed, incredibly profitable game, because it didn’t dare to challenge any ideas the buying public may have had, even if it meant condemning slave owners. Those who oppose the concept that games can create cultural insensitivity steadfastly argue any such effect produced through gameplay emerges “more or less spontaneously, with little conscious effort…not accessible to self-examination” (Jenkins 210).

Such a response is disingenuous when coming from game developers and hopelessly naïve about the creative process behind the construction of gameplay when coming from players. Any cultural insensitivity that become the effect of intensive immersion in the virtual reality constructed for the world in which the game takes place can be described in many ways, but spontaneous and lacking the capacity for self-examination are not two of them.

The hypothesis that the industry suffers from systemic cultural insensitivity informs the thesis that this widespread rejection of cultural awareness is a direct result of the historical subjectivation of the gamer himself to the point that the emotional responses this process engendered had the effect of becoming a central psychological force behind future game development. Racism, sexism, and cultural insensitivity are rampant in the games industry. By far the worst part of this rampant culture in games, however, is the effect it has on the target audience.

“Gamers” are a demographic which have become protective, entitled, and dangerous. You can see by looking at the comments section of any article of practically any video game that the core audience at the very least appears to be filled with incredibly angry and hateful people. Attempts to make games more inclusive are often met with vehement opposition, threats of boycott, and, typically, death threats. There was significant outcry when the immensely popular series Call of Duty announced that for the first time, women would be represented as playable characters. The core audience, mostly male, was outraged that women were allowed to play video games, too. The entitled core market reacted negatively to this change, which explains why it took so many games for women to even be considered as part of the market (Cai).

Gamers have been considered hostile for a long time. There was, of course, a negative sentiment surrounding playing video games for ages. There were arguments against video games as a waste of time, as being too violent, and even as being hazardous to the physical health of children. Gamers have been the target of scorn for as long as the medium has existed, but while this explains the reaction, it certainly does not justify it. The vitriolic opposition to the growth of the industry has been nightmarish. Not too many years ago, in fact, a movement began with the sole purpose of keeping oppressed groups from having any kind of say in the games industry. Gamergate, the movement, was comprised mostly of white male “gamers” and game journalists who had been outed from the major news sources for being racist or sexist, or simply bad at their jobs. A characteristic tactic of the movement was to bombard game developers with death threats to try and force them out of the industry (“BioWare writer received death threats to family”)

Every culture that has risen from the flames of rage and hostility has ultimately transformed into the thing they hate. The fictional story of Bioshock: Infinite is merely the virtual replication of the historical process leading to its creation.