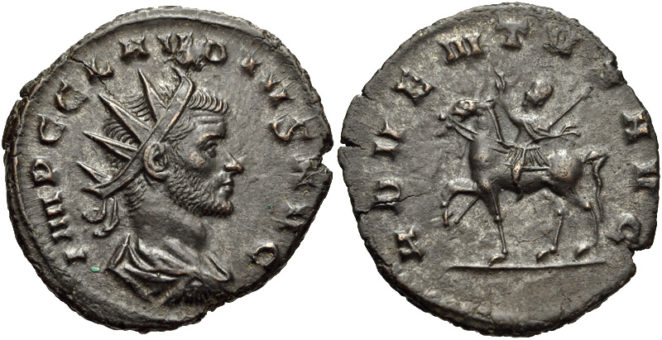 There were several Roman emperors during its declining centuries who took the names of predecessors and are therefore known by numbers as well as names. In most cases there was some relationship between emperors of the same name. However, that does not apply in the case of Claudius II (reigned 268-270), who never sought to claim descent from his namesake Claudius, the fourth emperor, who reigned between the years 41 and 54.

Marcus Aurelius Claudius was born in May 213 in Sirmium, in the Roman province of Pannonia. The ruins of the city are in modern-day Serbia. As an army general, Claudius served Emperor Gallienus and was present at the siege of Mediolanum (Milan) in 268 when Gallienus was killed. The siege sought to defeat an upstart would-be emperor named Aureolus, who surrendered to Claudius when the siege was eventually successful. Claudius’s first act was to have Aureolus executed.

Claudius was certainly a man who commanded respect. He was highly regarded for his morality and personal conduct, and also for his physical presence – it was said that he could knock a horse’s teeth out with his bare fists, but it is to be hoped that he did not demonstrate this particular skill too often! He was therefore seen by the Senate and population at large as the right man for the job at yet another time of crisis in the Roman empire.

The empire could have disintegrated at this time, due to barbarian invasions on several fronts, so decisive and immediate action was needed. Claudius provided this by defeating the Alemanni at Lake Benacus (now known as Lake Garda in northern Italy) and the Goths at Naissus (Nis in modern Serbia). In celebration of the latter victory Claudius added “Gothicus Maximus” to his name.

Claudius was offered clear opportunities to sort out two other trouble spots, but his tragedy is that he failed to take advantage of them.

In Gaul, Rome had been frustrated by the antics of Marcus Postumus, who declared himself “Emperor of the Gauls” and maintained that stance throughout the reign of Gallienus. He was murdered in 267 and a new “emperor” was declared. On taking office, Claudius could have taken strong action to restore the authority of Rome in the province, but he failed to do so.

In Palmyra, the client state on the empire’s eastern border, the ruler Odaenathus, who had declared loyalty to Rome, was assassinated early in 269. Claudius could have maintained the relationship by recognizing a new Palmyrene general, but he refused to do so. This was certainly a mistake, because keeping Palmyra friendly was definitely in Rome’s best interest, given the threat that loomed from further east in the shape of the Sassanid Empire.

A Roman force was defeated in western Turkey, after which the new ruler of Palmyra, Odaenathus’s widow Zenobia, expanded Palmyra’s reach into Arabia and Egypt, with further defeats being inflicted on Roman forces.

Claudius did not have much opportunity to repair the damage because he fell victim to an outbreak of plague while on campaign in the Balkans in January 270. His brother Quintillus took over briefly, but committed suicide when the forces of Lucius Domitius Aurelianus hove into view. It is possible that the reign of Quintillus lasted as little as 17 days, but the empire was at last about to get a much needed boost from a strong and decisive emperor, namely Aurelian.