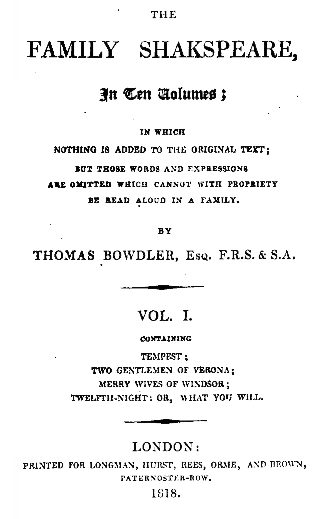 It has long been recognised that the works of William Shakespeare contain scenes, dialogues and language that are earthy, suggestive, crude, and full of sexual innuendo. They were, after all, written for audiences that were far less prudish than later generations, and whose idea of humour was much less sophisticated than our own. One reason for Shakespeare’s popularity in our own age is that we have come nearly full circle in our liberal appreciation of bawdiness (in the United Kingdom, at least).

However, this aspect of Shakespeare has caused problems down the years, especially where introducing his works to children is concerned. While appreciating that there is great drama and considerable beauty in his words, which should appeal to young audiences, there is also much that they either would not understand or which is too adult, in a sexual sense, for their ears.

It was quite common in the late 18th and early 19th centuries for family entertainments in middle-class British households to consist of readings of Shakespeare plays, and for scenes to be enacted. The Bowdler family of Bath was one such, with Thomas Bowdler senior reading to the family, which comprised six children, including Henrietta Maria (1750-1830) and Thomas junior (1754-1825).

When it came to the awkward passages, Thomas senior would cleverly substitute other words or skip lines or scenes that were “over the top”. In this way, the children were protected from the bawdiness and profanity that would have amused Shakespeare’s original audiences of “penny stinkards” but were less suitable in more modern times. However, the younger Bowdlers were still left with an abiding love and appreciation of the works of the Bard.

It was Henrietta who first had the idea of taking her father’s custom a step further and producing a version of Shakespeare that was suitable for family reading. She produced the first edition of “The Family Shakespeare” in 1807, comprising expurgated versions of twenty of the plays. She omitted, for example, “Hamlet”, in which the chief character makes so many sexual references that it would be a real challenge to sanitise them without destroying his character completely.

Thomas junior took credit for this work, not so much out of sibling jealously but in order to protect his sister from any accusations of impropriety. After all, if you are able to change a line that makes a punning reference to sexual intercourse, you must be able to appreciate the innuendo yourself. Thomas was, after all, a medical doctor, and a man, and it would not seem improper for him to have been the editor. That said, there is little doubt that most of work of that first edition was done by Henrietta.

However, Thomas now took the project very much into his own hands and in 1818 published a second edition of “The Family Shakspeare”, with the changed spelling being deliberate. This included virtually the whole Shakespeare canon as recognised at the time, although some of the plays gave him more problems than others. “Measure for Measure”, with its themes of sexual infidelity and prostitution, and “Othello”, in which the sexual relations of Othello and Desdemona are a constant driver of Iago’s innuendo, proved particularly tricky.

Dr Bowdler had a second target, which was profanity. As a convinced Anglican with Puritan leanings, any taking in vain of the name of God was definitely out, so all such exclamations tended to be replaced by “Heavens!” and Lady Macbeth’s “Out, damned spot” became “Out, crimson spot!”

There is a story to the effect that, when editing “Othello”, Thomas Bowdler substituted “trumpet” for “strumpet” in the line “she has played the strumpet in my bed”. Were it true this would be gloriously funny, but unfortunately this would appear to be the invention of a 20th century humorist.

Dr Bowdler’s method was not so much to substitute words of his own but rather to cut whole passages, and even characters, when they offended him by their language. As far as he was concerned, “many words and expressions occur which are of so indecent a nature as to render it highly desirable that they should be erased”. His motivation was to improve Shakespeare by removing text that he believed detracted from the quality of the original.

Thomas actually restored some passages that Henrietta had cut. If she thought that a passage was tedious or absurd, out it went, even if it contained no indecencies. Thomas was therefore trying to be loyal to the original except when he found it impossible not to be.

At first, neither edition excited much attention. However, when Thomas’s edition was at first condemned and then defended in the literary press, sales took off and the book continued in print for many years after the death of its progenitor. It was hugely influential, with many buyers convinced that this was the “true” Shakespeare and other versions should not be given house room. 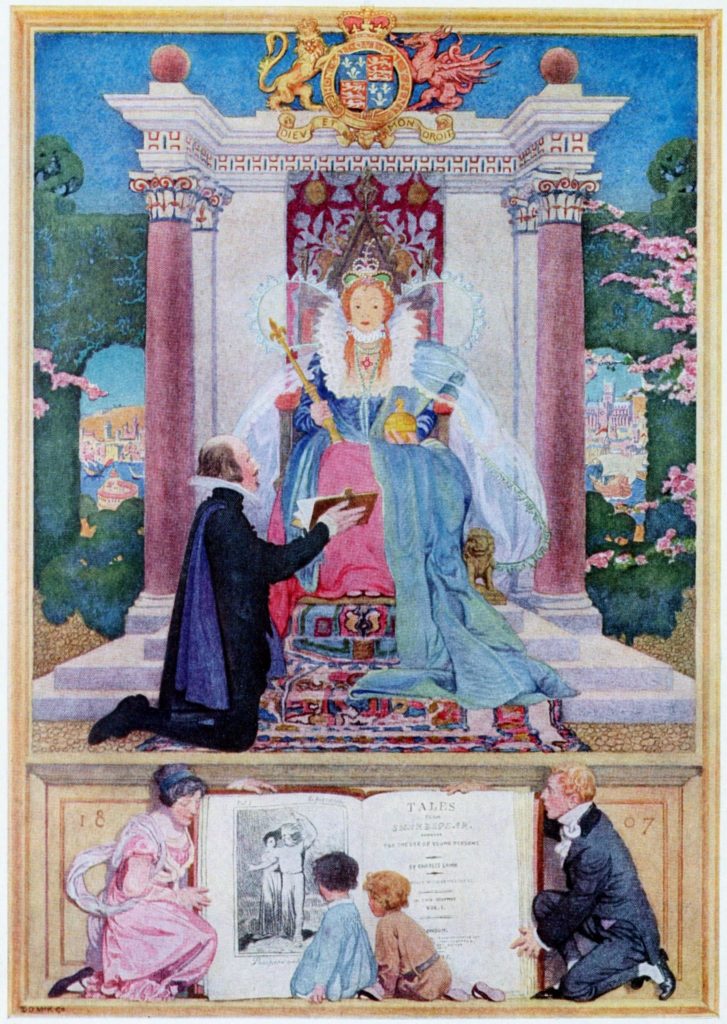 Another approach was simply to retell the stories of the plays as opposed to censoring the texts. The best example of this is “Tales From Shakespeare”, first published in 1807 (the same year as the first “Bowdler”) by another brother and sister team, namely Charles and Mary Lamb. As a way of introducing young children to Shakespeare, this would seem to have more to recommend it than the Bowdler method.

How should we regard the Bowdlers today?

Today, most people look back on “Bowdlerising” with horror, regarding any tinkering with the words of a great writer as an act of literary vandalism. It is true that virtually every stage production of a Shakespeare play will make adjustments to the text, with scenes and speeches being omitted where they add little to the plot, but these are made for dramatic effect and not because they contain too many “naughty words”. Audiences who watched a Bowdlerised staging of Shakespeare would soon wonder what on earth was going on, and they would certainly miss much of the “light relief” that the minor characters provide with their near-the-knuckle banter.

On the other hand, it is also true that generations of young children have grown to know about Shakespeare from versions that have been severely edited. Even today, one would not expect young children to read some of the racier scenes from his plays, but then we do not normally start children on Shakespeare at the sort of age that the Bowdler children presumably were when their father started reading to them.

On balance one would have to say that Bowdlerising is wrong in principle. Any work of art should be judged as a whole and as the artist intended it to be, assuming that this intention can be ascertained. We should certainly not experience Shakespeare in a form that is so cut about and perverted that it cannot be regarded as his work any longer, and that is what we are faced with in “The Family Shakspeare”. If Shakespeare is unfit for public consumption unless sanitised to a pale shadow of its former self, it should not be staged or read at all.