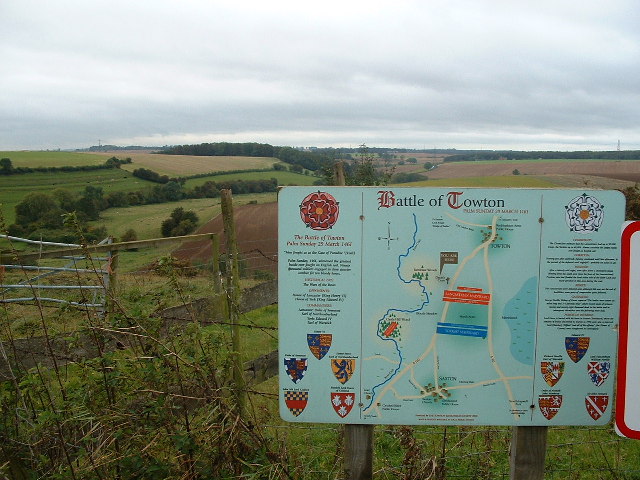 The Battle of Towton, fought on 29th March 1461, holds the record as the bloodiest battle ever fought on English soil with an estimated 20,000 men (maybe more) being killed. The battle marked an important stage in the so-called Wars of the Roses because it ended the reign of King Henry VI (although he was to return to the throne briefly nine years later) and saw the triumph of King Edward IV.

(Stone cross at the site of the Battle of Towton)

The term Wars of the Roses was not a contemporary one and only came into common use during the 19th century. It is based on a fiction invented by William Shakespeare in his play King Henry VI Part 1 (Act 2 Scene IV), in which nobles pick red or white roses to indicate which side they are on.

The two opposing houses of Lancaster and York took their names from the third and fourth surviving sons of King Edward III, namely John, Duke of Lancaster and Edmund, Duke of York. They were the great-grandfathers, respectively, of Henry VI and Edward IV. The house of Lancaster has traditionally been represented by a red rose and the House of York by a white one, but, although the Yorkist forces did use the white rose as their badge, there is no evidence that the Lancastrians used the red rose for this purpose.

The civil war for the mastery of England had already been running for 18 months when the armies of Henry and Edward met at Towton, which is 12 miles southwest of York. The day was Palm Sunday and the weather was bitterly cold with a strong wind whipping snow flurries into the faces of the troops – possibly as many as 50,000 – who were camped in readiness for battle. The Lancastrians probably outnumbered the Yorkists by as many as 5,000 men.

No eyewitness accounts of the battle have survived, but itseems clear that, after a preliminary exchange of arrows, Henry’s army charged and at first seemed to have the upper hand. Edward (aged18) fought in the front line and his personal bravery inspired his men. He was greatly helped by the arrival of fresh troops under the command of the Duke of Norfolk, these joining the fray as the snowstorm grew steadily worse.

Perceiving that the battle was lost, many Lancastrian soldiers tried to escape, but in the confusion caused by the poor visibility many found themselves trapped in the Cock Beck, a stream of no great width but fast-flowing with extremely cold water. Many men were weighed down by their armour and pushed under by those following behind. Many of the casualties suffered by the Lancastrians were caused by this means.

Henry, who did not take an active part in the battle due to his fragile mental state, escaped and fled to Scotland, leaving Edward to usurp the crown. However, the Lancastrian cause was not completely lost. Henry would have a second reign after Edward lost support in 1470 and his former ally the Earl of Warwick (known to history as the “Kingmaker”) turned against him and was instrumental in Henry regaining the throne. This would prove to be a short interregnum for Edward IV, who triumphed at later battles (Barnet and Tewkesbury in 1471)and continued to reign until his death in 1483.