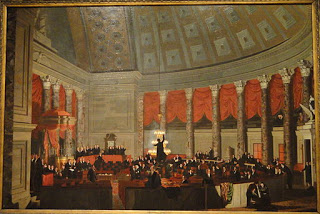 We all know the word “bunkum”, which means “a load of rubbish” when spoken or written by someone else, but I don’t suppose that many people know how the word came to mean what it does.

It all goes back to US Congressman Felix Walker, who was elected in 1816. Not only was he immensely proud of the people that he represented, but he thought that the rest of the House should know all about them as well.

He therefore spoke at length about his district whenever he got the opportunity, which meant every time he was called upon to speak, whether or not the matter at hand was even remotely relevant to his particular bit of North Carolina.

The name of his district was Buncombe County, and the name therefore became a byword for irrelevant rubbish.