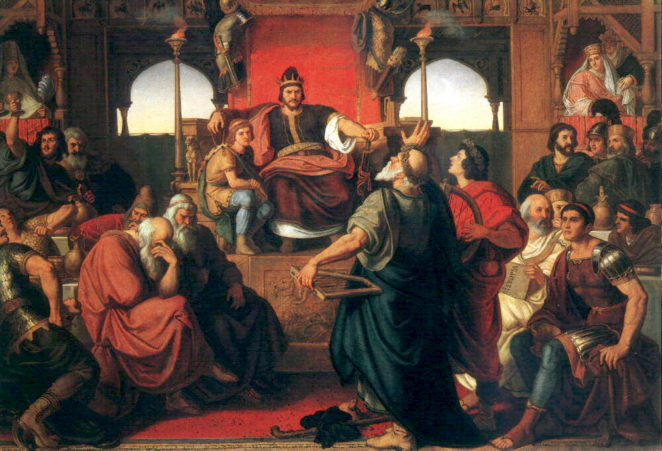 Priscus, a 5th century Romano-Greek diplomat, wrote an account of meeting Attila the Hun that conveys a different impression from the generally accepted view of a bloodthirsty tyrant who brought the Roman Empire to its knees.

The name Attila the Hun usually conjures up an image of a savage barbarian from central Europe who swept across the Roman Empire during its dying days, leaving death and destruction in his wake. It certainly suited Roman commentators to paint him in the worst possible light, given that he posed a credible threat to the civilised way of life that high-born Romans were used to, but were the unflattering accounts of Attila justified?

One account that gave a somewhat different impression of Attila was that of Priscus, a Greek who lived in the Eastern Roman Empire during the 5th century (his dates are uncertain, but were probably around 415-475 AD). He was a diplomat, a historian and a philosopher. In the year 448 he and another diplomat, Maximin, were sent by Emperor Theodosius II, based in Constantinople, to negotiate with Attila at his palace in Scythia (present-day Hungary). It appears that Maximin did most of the talking, leaving Priscus free to satisfy his curiosity about this race of people called the Huns who were causing so much trouble to Rome.

Priscus was clearly prepared to be open-minded, despite the evidence that Attila could be a brutal tyrant. He had, for example, had a gold dealer called Constantius crucified in a dispute over a consignment of gold dishes. He was now making similar threats against a dealer in silver plate, and this was one of the reasons for the attempt at diplomacy by Maximin and Priscus.

Attila, who came from nomadic stock, was used to moving around and did not stay long in one place, being the owner of many houses scattered throughout his empire. When Maximin and Priscus arrived in Scythian territory they learned that Attila had moved north, so they had no choice but to follow in his footsteps. When they reached the palace where he was they were surprised to be warmly received and were invited to join Attila and his family for dinner.

Priscus wrote of his surprise at the accommodation that Attila enjoyed. The palace was more like a villa than a castle, and the wooden enclosure that surrounded it was “not so much for protection as for the sake of appearance”.

The dinner was not being held in honour of the Roman delegation, but they were welcomed and treated with every politeness, although placed at the second level of precedence among the guests.

Attila reclined on a couch at the head of the room, with family members and guests arrayed on either side. He dressed simply and without wearing any sort of adornment, unlike some of the Scythians who proudly displayed their gold and gems.

The various courses were served according to a fixed ritual, with wine being drunk in the form of toasts to Attila and by Attila to his guests, again according to an order of precedence.

Priscus noted that the guests had silver plates and golden goblets, but Attila only ate and drank from wooden plates and cups. Likewise, although the food on offer was both plentiful and varied, Attila ate nothing but meat.

After the meal was over there was entertainment in the form of songs and a comic act at which the Scythian guests laughed uproariously but which did not produce as much as a smile on the face of Attila. However, when his youngest son came into the room and sat next to his father, Attila paid him considerable attention and was clearly pleased to have him there.

A modern reader might get the impression from this account that Attila was cold and emotionless, and therefore somewhat sinister. This does not appear to be how Priscus regarded him, in that his behaviour at the banquet was precisely what might be expected from a refined and high-born Roman or Greek. Priscus was clearly impressed by Attila’s modesty and restraint, which he was happy to record for the benefit of people back home who had previously preferred to believe other accounts.

It is always possible that the behaviour observed by Priscus was the result of Attila deliberately trying to copy Roman customs and manners. He was aware that the Roman Empire, even at this late stage, represented the highest ideals of civilized living and he sought to model his life on the standards that he had observed. Whatever the reason for Attila’s cultured and mannered treatment of his guests, he succeeded in impressing Priscus, whose account is admiring without being overblown. That said, Priscus was never in any doubt that Attila was a dangerous man with ambitions that did not bode well for the future of what was left of the Roman Empire.