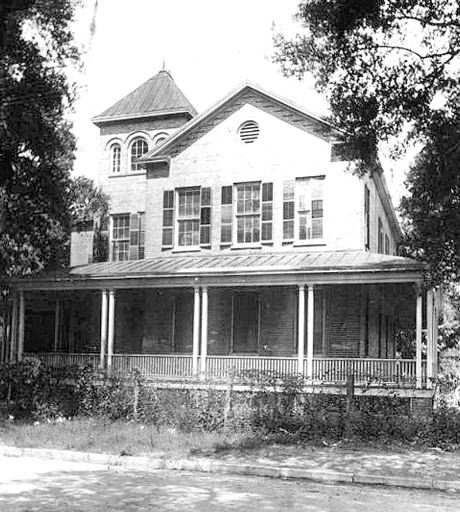 On 20 May 1916, three nuns in St. Augustine, Florida were arrested for the crime of teaching black children. The Florida state legislature had recently made it illegal to do so, even in what were known at the time as “negro schools” like St. Benedict the Moor, the school operated by the white nuns.

The Sisters of St. Joseph, the order which ran the school, was founded in 1650 in Le Puy-en-Velay, France. Their mission was to educate the poor or otherwise disadvantaged. That is what they intended to do in St. Augustine, Florida where they established a school after being invited to Florida shortly after the American Civil War by Bishop Augustin Verot. Verot had grown up in Le Puy and asked that eight of the sisters come to America to educate the newly freed slaves and their children.

The first school they established in St. Augustine in 1867. As time went on they established others in Key West and Ybor City. Their efforts were aided by the financial help of St. Katherine Drexel. In 1898 they opened St. Benedict the Moor. They were not alone in their efforts. The Protestant American Missionary Association operated similar schools.

On 07 Jun 1913, the Florida legislature unanimously passed “An Act Prohibiting White Persons from Teaching Negroes in Negro Schools”. Bishop William John Kenny sought the advice of his legal advisor, Alston Cockrell, who told the bishop that he believed the law to be unconstitutional. At his advice the bishop decided to continue educating the children and to test the law’s constitutionality. Even though the bishop died that October, his successor, 34-year-old Bishop Michael Joseph Curley, continued with the case. The authorities asked Curley to replace the white nuns with black teachers. He refused.

On April of 2016, while the nuns were celebrating the fiftieth anniversary of their mission, the sheriff came to the door with orders signed by Governor Park Trammell to enforce the law. The sheriff arrested three of the nuns, Sr. Mary Thomasine Hehir, Sr. Mary Scholastica Sullivan and Sr. Mary Benignus Cameron on the charge of “unlawfully teaching negroes in a negro school.” The case drew national attention.

1916 was an election year and Sidney Johnston Catts, a Baptist minister who had left his job to sell insurance, was running for governor. A racist, Catts developed a series of conspiracy theories to scare white voters into voting for him. One of his theories stated that Catholics in Florida were hiding weapons under their churches and enlisting blacks in an armed revolt on behalf of German Kaiser Wilhelm II. (This is the time of World War I and Catts believed that the Italian pope was German by birth.) When they succeeded, Catts claimed, Pope Benedict XV would move the Vatican to Pasco County and close all of the Protestant churches. After his wild claims were responded to by Fr. Charles Mohr, a Benedictine abbot, Catts was forced to tone down the rhetoric and went so far as to make public appearances with Catholics.

Catts saw the nuns ministry as an attempt to undermine the public schools and destroy the Jim Crow social order. Catts won the Democrats nomination but a recount was ordered. He decided to run under the Prohibition Party and won the race.

On 20 May 1916 Judge George Cooper Gibbs ruled that the law violated both the state constitution and the 14th Amendment to the US Constitution. He did allow the law to apply to the public schools.

The ministry of the nuns at St. Benedict the Moor continued until the school closed in 1968. Desegregation made it unnecessary. The school still stands and was placed on the National Register of Historic Places in 1991. Sidney Catts served a four-year term as governor and ran unsuccessfully for US senator. He ran for governor twice losing both times. He died in 1936. Today the Sisters of St. Joseph are still an active congregation of nuns with 14,000 members including 7,000 in the USA. They minister in fifty countries around the world. They now work with the aged, unwed mothers and migrants.