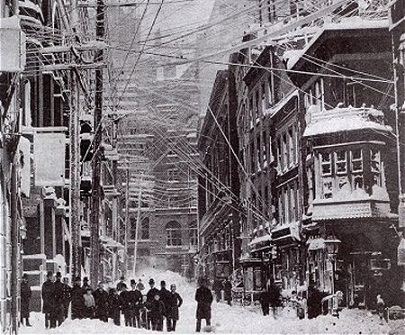 If you live in the USA you, no doubt, have lived through a winter that was especially horrible. In recent years the winter of 2013-2014 was noted for being a terrible one, especially the eastern half of the country. However, there have been worse. In March of 1888 a blizzard hit New York City and the surrounding area. It remains one of the most severe blizzards in the history of recorded weather in the USA. Although the exact cost in lives is unknown, it is believed to be in excess of 400.

Early on 11 Mar 1888 there was a steady rainfall. As it got colder the rain turned to snow which fell from 11 Mar to 14 Mar. The worst of the storm started shortly after midnight on the 12th. Anywhere from 20 to 60 inches of snow fell over parts of New Jersey, New York, Massachusetts, and Connecticut. Temperatures dropped. The thermometer in Central Park showed temperatures in the single digits. Drifts of more than 50 feet – the height of a five story building – were created by the sustained 45 mph winds with 80 mph gusts. The storm shut down the railroads, even New York City’s elevated trains, and confined people in their houses for as long as a week.

Often referred to as the Great White Hurricane, the northeastern US was paralyzed from Chesapeake Bay to Maine and into Canada’s Maritime Provinces. The telegraph system, which ran overhead at the time (see the photo), was disabled. (After the storm the lines were moved underground.) Since the fire department was paralyzed, unable to answer the alarms, there was about $25 million in damage from fire alone, a huge amount by the standards of the time.

In an incident reported on the front page of the New York Sun, a policeman saw the arm of a man protruding from a snowdrift at 7th Avenue and 53rd Street. He dug the man out. He had died several hours before and was frozen solid. He was identified as George Baremore, a wealthy businessman, who had tried to walk to his office.

A southbound elevated train with engines at both ends was struck by another elevated train when it tried to travel south. Although there were a number of injuries, only the engineer of the second train was killed. Afraid of a fire, many people jumped from the train’s windows.

A frozen-over East River from the Brooklyn side

There was substantial damage farther south as well. Ninety ships sank in the waters of Maryland and Virginia. Approximately 100 sailors died in the storm.

What I find the most interesting, and perhaps the scariest part of the research for this article, it that every source, including the main ones listed below, called this “one of the worst blizzards in US history” or something similar. None of them mentioned a worse one specifically. At any rate, I hope I never have to experience one of even this severity.