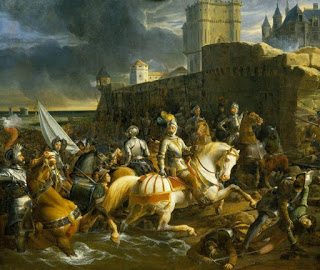 On 7th January 1558 England lost her final piece of French territory, namely the port of Calais.

When Duke William conquered England in 1066 he simply added that country to what he held already, notably the Duchy of Normandy.

When Henry II became king in 1154 he was already Count of Anjou and his wife Eleanor was Duchess of Aquitaine. Henry’s empire eventually stretched from the north of England to the Spanish border.

However, much of this territory was lost in the following centuries, and it would all have been in French hands by 1558 had it not been for the action in 1346 by King Edward III to besiege and capture Calais. This toehold on the continent of Europe remained in English hands until the French King Henri II laid siege to it at the beginning of January 1558.

The successful general was François de Lorraine, duc de Guise, who was the original “Scarface”. He acquired this nickname following a battle wound earlier in his career.

It only took Guise six days to overcome the resistance of the English garrison station in Calais. The area around the town became known in France as “the reconquered country” but the loss was felt deeply in England.

Queen Mary I had not had a happy reign. She was unpopular for having married the king of Spain and for her aggressive promotion of Catholicism in England. A series of poor harvests had not helped matters, so the loss of Calais was “the final straw”. Mary had failed to produce an heir and she was probably already suffering from the ovarian cancer that would lead to her death in November of that year. She probably knew that her life was in its closing stages, despite being aged only 41, when she uttered the famous words: “When I am dead and opened, you shall find ‘Calais’ written on my heart”.