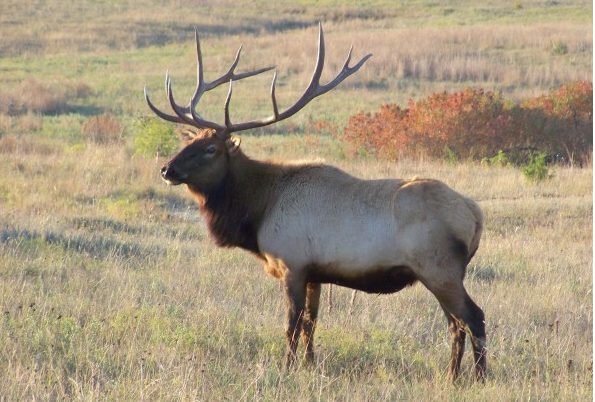 source of the photo above:  https://aiglebleu.net/le-wapiti-animal-totem/

The « wapiti » or Cervus canadensis is a herbivore mammal deer within the Cervidae family. It is one of the biggest of the Cervidae but still smaller than the moose. In the American English it is called an elk, but in the British English it is named a moose although a moose is different because it is a lot larger than the « wapiti ». (You can see my presentation on the moose under the French name « orignal »).

The « wapiti » lives in or near forests where it eats plants, leaves and tree bark. It is a ruminant as its stomach has four chambers. During the summer the « wapiti » eats non-stop consuming about 4 to 7 kg per day (9 to 15 pounds per day). This animal also is classified as an ungalata because it has an even number of « fingers » on its paws just like camels, goats and bovines.

The « wapiti’s » living areas are located in North America and Asia. But the « wapiti » has adapted himself very well in areas where it was introduced such as New-Zealand and Argentina. The « wapiti » is an excellent swimmer (just like the moose or « orignal » ). It can also run short distances with a speed of up to 65 km per hours (40 miles per hour).

The male « wapitis »  have horns just like most cervidae but they are not as big as the moose’s horns. These horns grow constantly during the summer and apparently fall during the winter. The longest horns can measure up to 1,2 meters long (4 feet long) and can weigh up to 18 kg (40 pounds). Each horns can have up to eight branches on them. Actually some cultures view the « wapiti » as a great spiritual entity and force of nature. In certain regions of Asia, their horns and the velvet that covers them are used in traditional medicine.

The greatest predator of the « wapiti » is and remains the wolf and man of course. The « wapiti » is hunted as a game by man because its meat is lean and contains more protein than beef or any poultry.

The « Watusi » is a domestic bovine from East Africa. As you can see its horns are gigantic and can measure up to 2,5 meters long (8 feet long). The horns can be straight to each side of the head or angled upwards. But it is to be noted that these horns are mostly hollow and thus are not as heavy as you might think. An adult « watusi » can weigh 500 to 800 kg (1,100 to 1,800 pounds) and can measure 1,5 meters (4 to 5 feet long). The color of the « watusi » varies from brown to rust to black with several white patches of different size just like in the picture below. 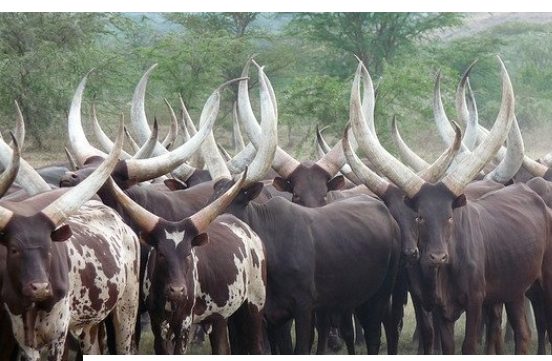 A herd of « watusis » is considered a sign of power and riches in most African tribes. It is also at the base of everyday life and beliefs of these same tribes. It is often considered a sacred animal. That is because it provides milk, blood (although the bovine is not killed), leather, horns, urine (used as a disinfectant) and dung (used as a combustible in areas where there is no wood to burn).

The name « watusi » is derived from the word « watutsi » (the Swahili plural of « tutsi » ). This bovine is also sometimes called an « ankola » in Ouganda.