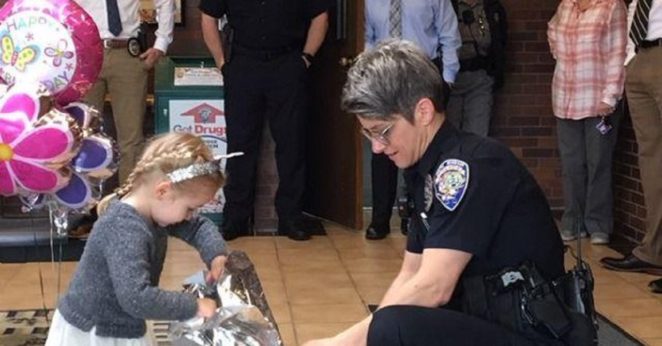 I am sure you have heard of the slogan about planting good deeds to strangers without any expectation of any reward at that time.

The mother of a four year old girl named Emmie whose last name was not released decided to treat her daughter to enjoy her fourth birthday by going to visit the headquarters of the South Windsor Police Department in Connecticut.

When Emmie’s mother takes her daughter to preschool, the route goes by the local police department.

Emmie must have been excited to see all of the police officers inside the station serenade her with singing the song “Happy Birthday” and showering her with gifts.

It is kind of odd that a young girl would be taken to celebrate her fourth year of her young life by having her mom take her to a local police station in Connecticut.

The most likely reason this event happened to Emmie is that Emmie’s mother may know of some of the police officers personally since they may be working at Emmie’s school during the day.

It is nice to see  a parent teach a child that police officers are friendly to the people that they protect and serve in their communities.