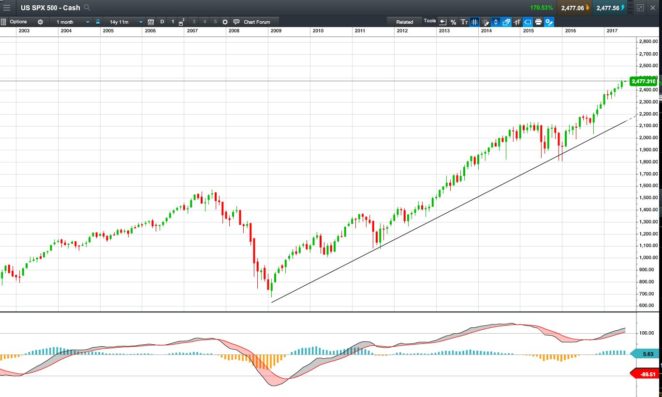 There’s no stopping the equity markets of the USA. It seems every day that there’s a new record being hit on the SP500 and Nasdaq, no doubt assisted by the growth and upbeat earnings of the technology companies and banks that are posting record profits. Looking back to 2008 when the last financial crisis kicked off, to the low points of 2009; we can see that the markets have been on a one way upwards trend since.

But when does it stop?

I recall back in summer 2013 when SP500 was struggling to break beyond 1600 points, my fellow traders and I were discussing that surely a major correction will occur in the markets imminently! Evidently not, and I think its fair to say we are not the only ones who suffered some losses short selling the index back then. Putting aside the August 2015 slight correction caused by the Chinese stock market crash, there has not been any other disruptions to the SP500 rocket fueled upwards surge.

This could be about to change.

The key ingredients for a slowdown and reversal in this buying trend lies with Janet Yellen, chairwoman of the FED and the policy decisions her committee lay forth in the Autumn 2017 meeting. We’ve already seen the first US interest rate rise in December 2015 in over a decade, and more recently two further rate rises in 2017. There is a strong indication that the FED will reduce monetary stimulus and cut back bond purchases. If essentially the rate rises are akin to reducing the cc size of the economic engine, then reducing tapering/monetary stimulus will be similar to cutting back on the engine oil that greases the economy. How much fuel is in the tank, is a hard one to forecast – as its the risk appetite and financial accumen of the investors and consumers.

So could the combination of an overheated engine, slowing risk appetite and reduced buying momentum capacity be the necessary storm that brings about a major 15-20% correction in the markets? The sell off will start in small clunks, as investors and traders start to slowly take profit (that is, sell of some of their holding positions). The herd mentality of buying spree will break up gradually and as the markets start to fall, the fear gauge of those others who haven’t taken profit will start to kick in. That’s where the psychology of Loss Aversion comes into play. Investors love making profits, naturally, but what they really hate most is making losses (no matter how small). Those who are suffering some losses, will likely buy back more into the market to try bring about a lower breakeven price; along with those who have already sold – will jump back in and buy back what they sold but at a cheaper price hoping to make even more money when the prices rises back up.

Ceteris Paribus, the correction will dampen and the buying appetite will return. However, it is unlikely the surge of previous years will still continue. Investors will be more weary that not everything great can last forever and they may look at alternative investment choices – such as bonds etc.

In my next post – I will discuss more about how to profit from the fall in the markets and alternative investment options to reduce your risk exposure when there is a market correction.