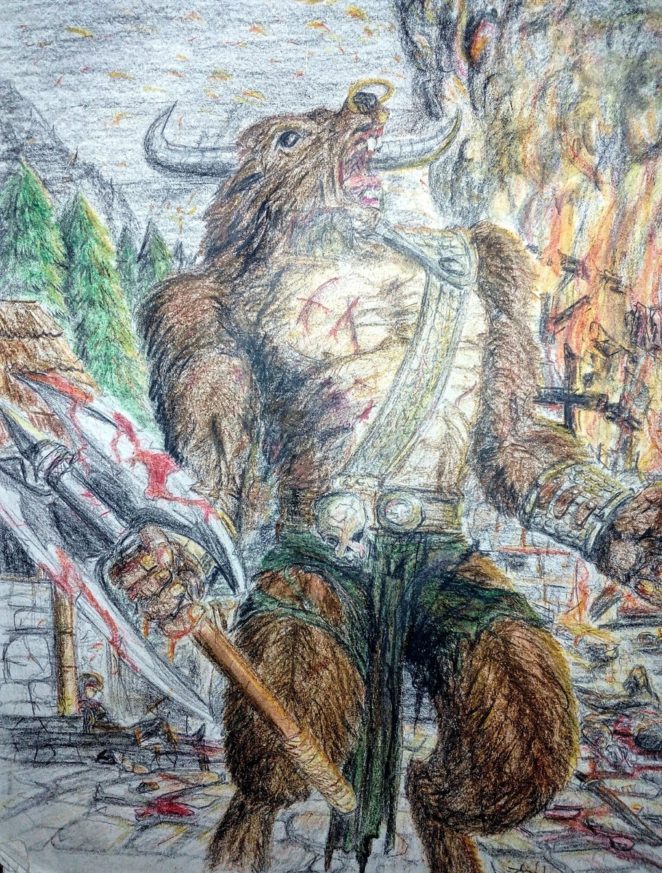 The Wrath of the Raging Minotaur

His heart was full of hatred towards the pale skinned humans. Humans both feared and hated him because he was different. He was different, yes. A Half-man, half-bull creature! He was alone. He does not know how he came to be.

For time immemorial, he kept his distance from the humans. Hidden in his cave beyond the thick dark forest. Once, he would roam freely within the forest and even the open fields. Until the pale skinned settlers came.

They screamed in fear when they saw him. They banded together and hunted him, spearing him even though he did them no harm. He retreated and hid in the dark side of the forest where the humans feared to venture.

Then she came. She was screaming, running away from a group of rowdy men. Clearly they intend to do her harm. She was running towards near his cave. He intervened! He jumped in front of the men! They were startled! Fear gripped them for a moment. But only for a moment. They consumed too much wine that fear no longer affect them for long. They have spears which they threw at him. He blocked two of the spears with his broad axe. One missed him. But one hit him on the shoulder. But his hide was so thick that the spear gave him nothing but barely a scratch! He charged towards them, with one swing of his axe two fell down, blood sputtering from their chest. One was able to strike him with sword. But just like with the spear, the Minotaur was barely scratched. He swung his huge arm, sending the third human flying. His body broke in half when he hit a hundred year old tree. The last one, finally gripped in fear ran away.

He turned towards the Female. She fainted in exhaustion.

Hours later she woke up. She was in  cave, lit by a couple of torches and and some burning wood on the ground. A hot soup was already set beside her. She saw her horned rescuer brooding on  a dark corner of the cave. She took the soup to satisfy her hunger.

She looked at her rescuer again, thanking him. But from where she was all she can see is the creature’s silhouette, and all she gets in reply are grunts and snorts. Fear crawled up her spine when she realized her rescuer was not human. For a moment she froze. However, she thought if the creature was evil, she may had already been hurt or even dead by now. Instead, she was not even been harmed by the men who chased her deep into the dark forest. She stood up and approached the brooding horned creature. Fear already left her, replaced by gratitude and compassion.

She told her story how his father who was a drunkard and a gambler gave her up as payment to debts to the men who chased her. She told her life stories while tears flow from her bright blue eyes.

Though the Minotaur does not, cannot speak her tongue he understood all so well her stories. And for the very first time, the creature felt calm. The rage that has always been in his heart left as he listened to the woman’s voice. For once in his life, he no longer felt alone.

Image: Wrath of the Minotaur –  water colored pencil on paper. I drew this more than a year ago. The story just started to build up when I uploaded this image here last week. It just kept on building up in my mind as I write that I decided to cut it into several parts (probably 3 parts)

I hope you enjoyed this part.