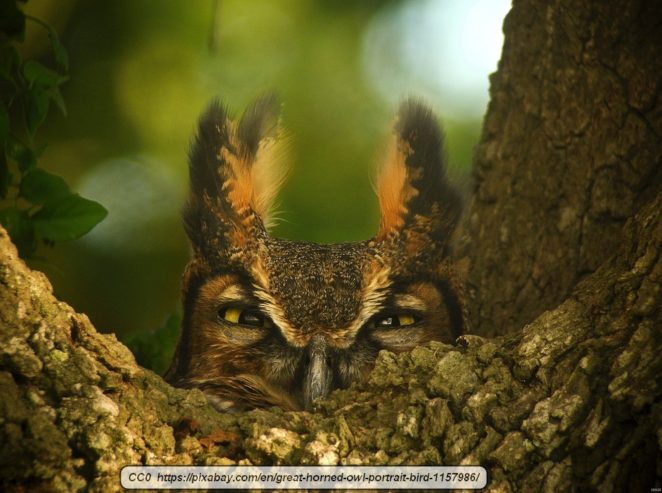 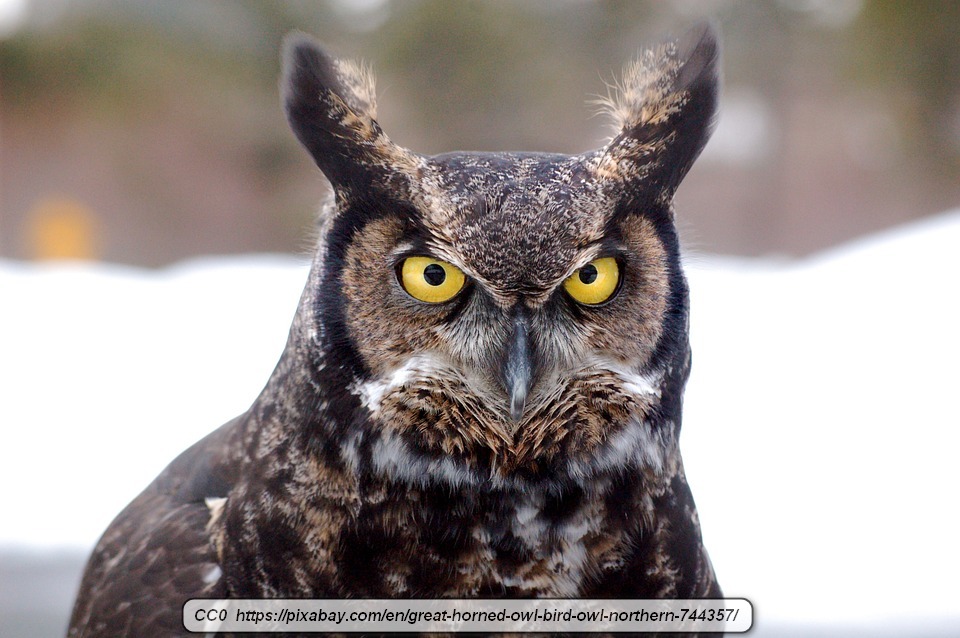 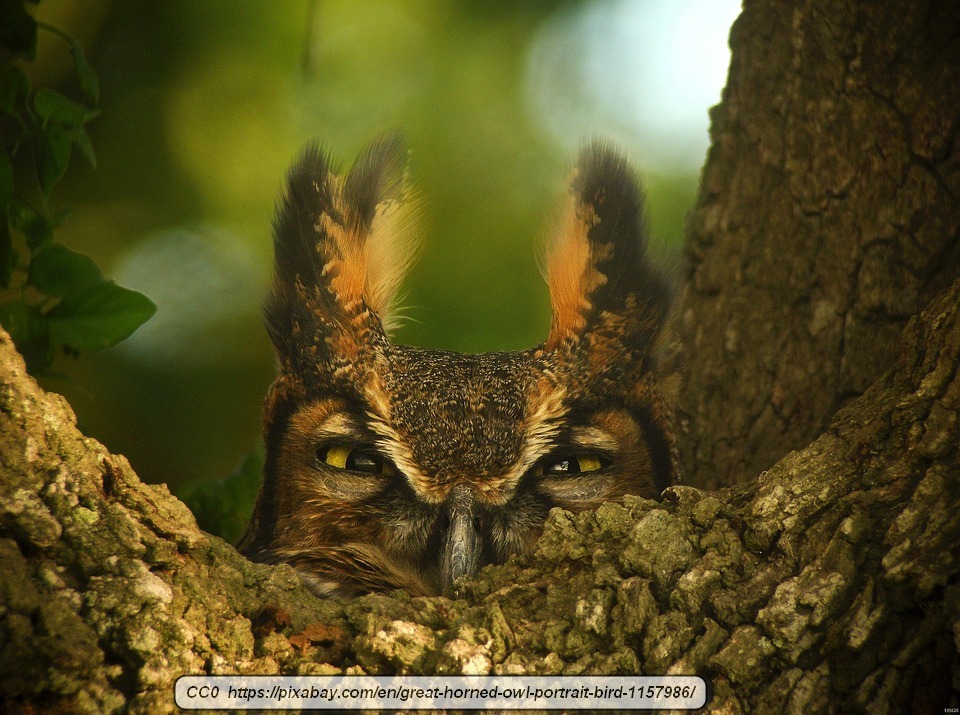 The coloration varies between brown and gray, usually with heavy barring that allows the birds to blend in well with the background. It also has a heavy, thick build and a large head that features facial disks around the eyes. The horns, more properly called plumicorns, are pronounced and though about half of the owl species also have the feather tufts, those of the great horned owl are big enough that they aid in the identification of the bird, even at a distance.

The call of the great horned owl is another identifier of the bird. It is a low-pitched hooting, normally with three rapid hoots followed by two longer, more drawn out hoots. This gives it the sound of hoo-hoo-hoo hooo hooo. This is repeated several times, and it isn’t unusual to hear another horned owl in the distance answering. It has other calls, too, but this is the most common.

There are at least 20 subspecies of this bird, with differences in coloration and habitat being the determining factor. Their range is from lowlands to highlands, forests to prairies and fields, so while it is common in forested areas, it is also common in open country and land that forms the border between the extremes.

These owls are also occasionally seen during the daytime, but most of their hunting occurs at night, especially in the hours between dusk and midnight. Like most owls, the hunting great horned owl is almost silent as it swoops down on its prey. Often, these owls will sit upon a perch and when they see prey, they fly down and capture the prey animal, normally killing it instantly with its talons. It then returns to the perch to consume its dinner. If the prey is too large, though, the owl may consume it on the ground. It may also eat part of the prey, fly away and return to eat more later. 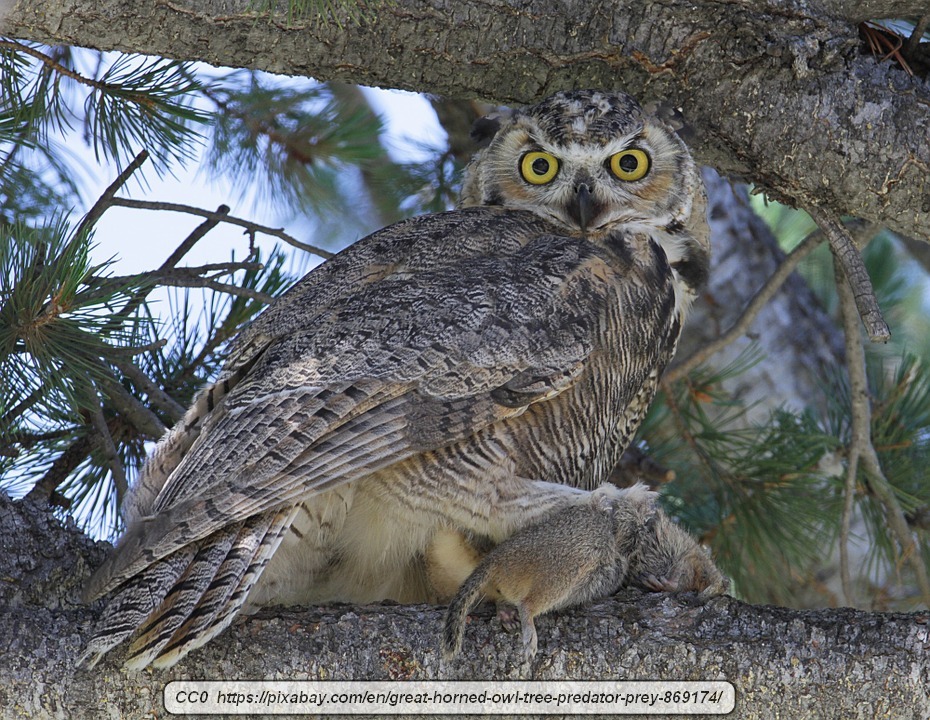 It could be said that if a great horned owl can subdue and kill an animal, it will eat it. This kind of owl eats a large number of rodents; mice, rats, voles, squirrels, lemmings, woodrats and even larger rodents like muskrats, nutria, and beavers. It has been known to kill and eat porcupines. It also eats lagomorphs like cotton-tailed rabbits, snowshoe hares, jack hares and arctic hares. They will additionally eat reptiles, amphibians and other birds. Thus, there is truth in the initial observation that if the owl can subdue and kill an animal, it will do so and eat it. In fact, it also eats other owls, such as the Northern Spotted Owl. 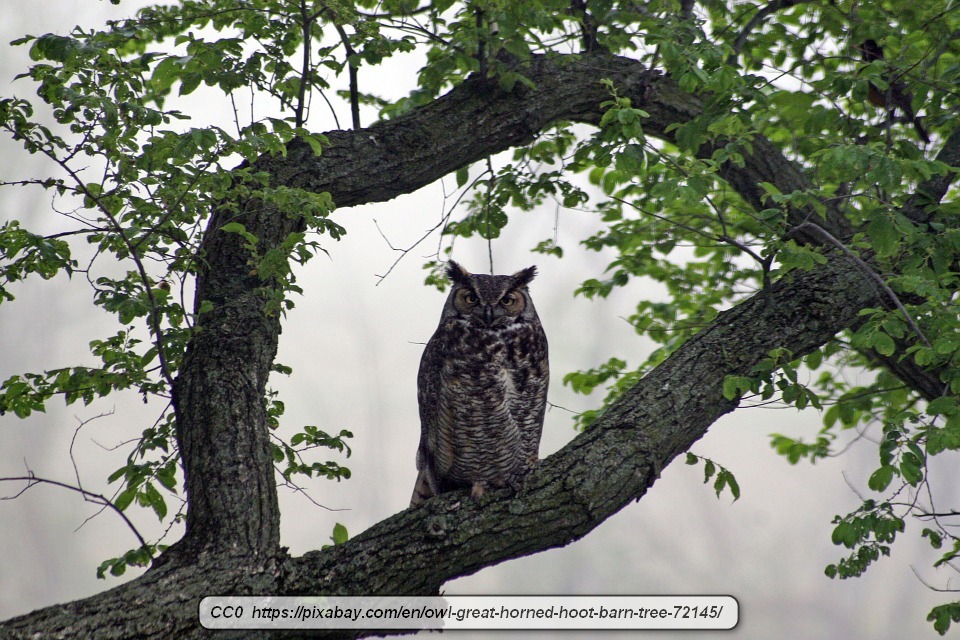 Great horned owls are monogamous and though they occasionally do build their own nests, they usually use abandoned hawk, eagle and even tree squirrel nests. The eggs are relatively large, about the size of those of domesticated ducks. The eggs are often incubated while the air temperatures are bitter cold. The eggs are usually laid during the cold part of winter.

These are long-lived birds, too. It isn’t unusual for them to live in excess of 20 years, some of those that have been banded have been still living at around 30 years of age and one report that hasn’t been proven is of a great horned owl that was 68 years old.

Easily their biggest threat is from man. Specifically, owls flying into power wires and buildings often die. Many also died because of DDT poisoning, before DDT was banned. Not many other animals prey upon great horned owls, though, and conversely, these owls often do hunt, kill and eat hawks, eagles, and falcons at night. Though numbers are being watched, at this time the great horned owl is considered to be a species of least concern.

One other bit of trivia; the great horned owl is held in such esteem that it is officially the provincial bird of Alberta, Canada.