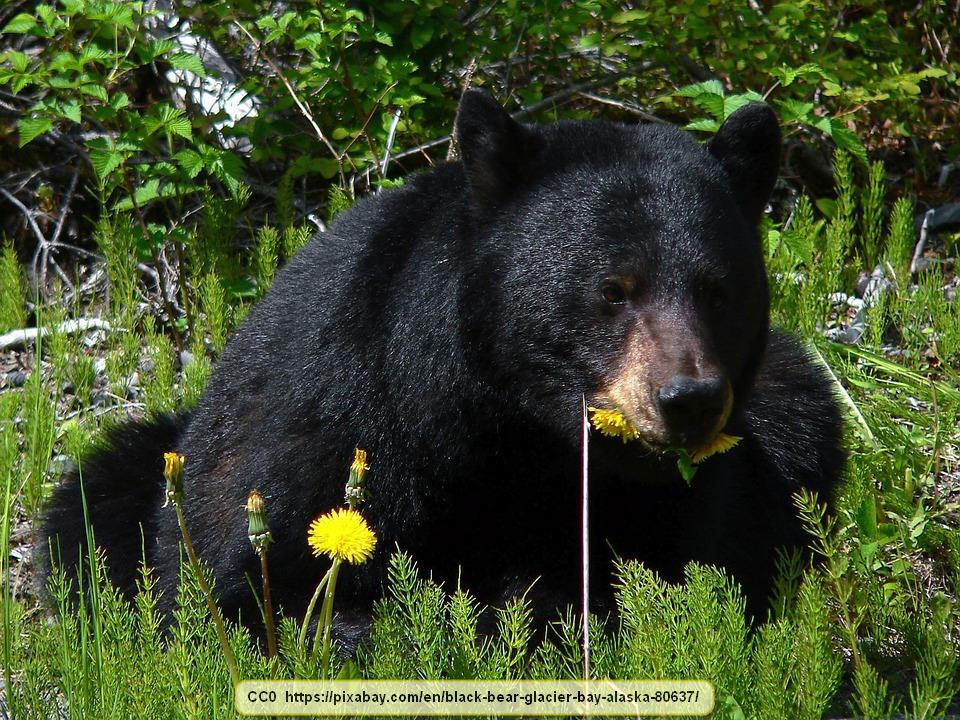 There are roughly 325 million people in the US. There is an estimate that there are somewhat more than 300,000 black bears in the US. The number of those people who would be terrified if they saw a black bear ambling down the road is quite large. A big reason for this is that they are afraid that the bear will attack them and eat them. There is little cause for alarm, although very early in the year, they do tend to be cranky and hungry. Black bears avoid people when they can. They’ve been known to attack people, but that is nearly always the fault of the person rather than the bear.

The American black bear is more than a quite interesting creature, it is also a survivor. A big reason for this is its diet. Note that humans are usually not on the menu.

A very good description of a black bear would be to label it as an omnivorous apex predator. That is to say, it is a hunter with few threats except for man, yet it will eat a wide range of foods rather than sticking strictly to eating meat. This gives the bear a great advantage over many other predators. For instance, cougars, bobcats, and lynxes only eat meat.

Black bears are quite able hunters and will eat rabbits, hares, squirrels, other rodents, birds and larger prey such as deer. It is a fast animal, despite its size an somewhat clumsy appearance, and over a short distance, a bear can outrun a horse. This makes the American black bear a formidable and fearsome predator. It will also catch fish and crayfish, as well as frogs and salamanders from rivers and streams and is adept at doing so.

Unlike many other apex predators, though, black bears don’t only eat freshly killed prey. They seem to have little objection to eating carrion, including meat that has been rotting for days. Black bears have an exceptional sense of smell, and in bear country, the smell of rotting flesh is something they can easily detect, drawing them to the carcass and an easy meal.

If a bear happens upon the bones of another animal, they may also use their powerful jaws to crack the bones to get to the marrow inside of them. This provides the bears with a great source of additional protein, which they need to build up fat reserves for the winter.

A black bear will also eat insects such as ants and termites; often ripping open logs to get at the insects and grubs that are inside. Bears are also quite fond of honey and sweets and will raid honeybee nests with relish. They aren’t immune from the stings of the bees and will get stung many times, but love the sweet honey so much that they will repeatedly raid the same nest, despite the protests and stings of the angry bees.

When they aren’t hunting, fishing, eating carrion or munching on insects and other similar soft-bodied little animals, bears will also include vegetation in their diets. In fact, they are quite opportunistic.

They will eat grasses, some flowers, weeds and will dig for roots and tubers. Ripening fruit and berries are feast items for black bears, especially if they are sweet. These include but aren’t limited to apples, plums, cherries, blackberries, gooseberries, raspberries, huckleberries, blueberries, pears and currants. They will also eat the tender buds and branch tips of many bushes and trees.

American black bears have also been observed eating mushrooms and even stripping bark off of trees to get to the inner bark or cambium.

Many people who have been around black bears much have also discovered how opportunistic they are. They will happily munch on almost anything man may leave in picnic and camping grounds and have no issue going through garbage to get to scraps, sometimes shredding the garbage can in the process. It makes sense, too. It is easier to eat scraps than it is to expend energy in hunting prey.

During the winter, it becomes a different matter. Food is scarce, so black bears will go into extended periods of sleep, rousing briefly only during warm spells to forage for food. This is why the diet of the American black bear is so important. Eating such a wide variety of foods allows a bear to put on weight so it can survive the winter on fat reserves. This is also the reason they are cranky early in the year. They wake up quite hungry and after losing a great deal of weight during their slumber.

There aren’t many major predators that have a diet that is quite as varied as that of a black bear. Then again, since they are such large animals, if they weren’t that way, they could easily starve to death.

I’m including a video clip. It says ‘Nerves of Steel’, but really isn’t. Neither of the bears in this clip is an adult. They look like they are 4-6 months old, so they are still babies. I’d be more worried about momma, who is probably not far away. Still, this shows how skiddish bears are around people.