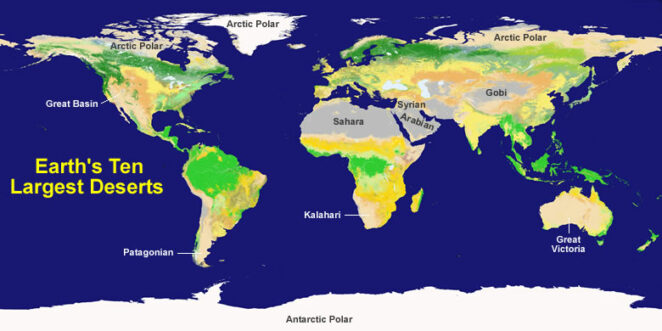 Well, Antarctica places, on record, the largest ‘desert‘ among the 20 deserts on earth. My first reaction was unbelief. Antarctica is a”desert”!? Is Antarctica a “dry landscape of 100 percent sand and sand dunes” covered in snow and glaziers? On second thought, Antarctica is a deserted 5.5 million square miles of ice-covered icescape (extensive view) in the Southpole. No pun intended.

Well, apparently, NASA says that Antarctica is in fact, desert.

Logic. Investigative research does get the best of many of us. So, Geology.com (link below) proves what a desert is. Furthermore, “A desert is a landscape or region that receives about 0.0025 % precipitation in the form of rain, sleet, or snow. Obviously very little drop from the sky– less than 250 mm per year or about 6.5 inches per year.” So, it barely rains in Antarctica. We looked up “precipitation”, too, to make sure we got it right.

Exciting to learn that one-third of Earth’s land surface is a desert. This is also according to reputable NASA.

Based on their geographic situation, these four different types of deserts describe what they are and where they are on our beloved Earth:

I’ll leave the findings to our experienced scientists and science experts of 35++ years of unsnared old-fox intelligence. And to you, my fellow scholars!

Amazing, isn’t it? But I still find it hard to believe. Check out this link.