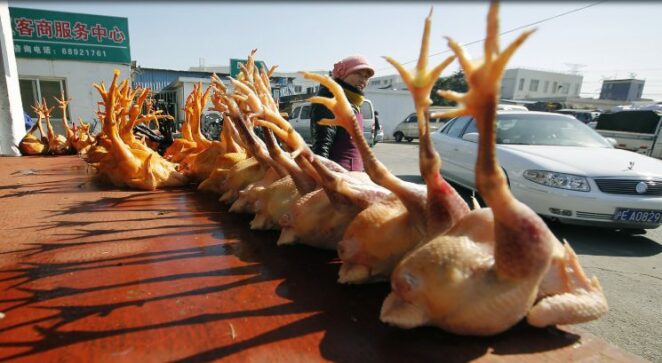 There are no actual mysterious new diseases such as the coronavirus, SARS and bird flu as science has determined that most have originated in the live meat markets in China, where all sorts of live wild animals like snakes, bats, porcupines, armadillos, African ant-eaters, and peacocks are kept in cages, alongside unrefrigerated raw meat, to sell as food or for “medicine”.

The lack of food hygiene awareness is unbelievable, (see image above). It was simply inevitable, these diseases had to make the leap from animals to humans. But its not just from China that New diseases have emerged. Sometimes this is caging animals, keeping them in tiny living areas, and not bothering to clean them properly. Swine flu originated in North America: I’m not certain how, but when you think how high the US’s incidences of food poisoning are compared to other developed countries, and then compare the laws on animal welfare, it’s likely to have involved bad husbandry.

In recent years we’ve also had mad cow disease because the oh-so-wise human beings decided to feed herbivores on meat-derived protein. Possibly even from the beef itself. Ebola is linked to eating Bushmeat in sub-Saharan Africa: bush meat includes primates, other wild mammals, birds, and lizards. Here it’s not bad or unnatural treatment of animals, but bad handling of them, and the fact that it’s often the only source of protein or product to sell to the extremely poor.

The Spanish Flu was bird flu. It was spread rapidly all over the world by war: soldiers living and traveling in close confinement. Not inhuman treatment of animals, but the fact of war. Which is a very human thing. And of course, there is AIDS. It came from chimpanzees and is spread by an exchange of bodily fluids. In other words, it’s highly likely that somebody had sex with an infected chimp and then had sex with other humans to pass it on.

And as its quite difficult to catch it in other ways, except sharing dirty needles or giving birth, it spread through promiscuity, ie, people having sex with multiple partners. And as the gay community tends to be more promiscuous than the hetero community, especially men, it spread like wildfire through them.

Notice anything in common? All of these new diseases emerged because human beings were doing something that God never intended them to do. Cruelty to animals, neglect of livestock, war, poverty, promiscuity, sex with animals all play their part in new diseases. Soon the coronavirus will be over, and we’ll all be able to get back to normal living. In a few years, I can guarantee you, another disease will emerge, and it will have been enabled by men behaving badly.