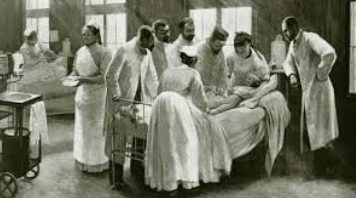 You may or may not know who this remarkable man was but regardless of whether you know it or not, if you were born in a medical facility somewhere in the world, you likely owe him your life!

Sad, old Ignaz Philipp Semmelweis was a Hungarian physician and scientist, now known by many as an early pioneer of antiseptic procedures. Described as the “savior of mothers”, Semmelweis discovered that the incidence of puerperal fever could be drastically cut by the use of hand disinfection in obstetrical clinics.

Semmelweis was posted at the maternity ward of a hospital in Vienna. Many women in the hospital were dying of what was then called childbed fever. Childbed fever was actually puerperal fever which is caused by uterine infection following childbirth. Semmelweis tried various things but the number of deaths would just not come down.

THEY THOUGHT WOMEN DIED FROM FRIGHT…

At that time a priest used to visit the ward whenever a woman died of childbed fever and he would slowly move across the women’s beds. An attendant would walk along with the priest ringing a bell. It was thought that the sound of the bell could be scaring the women who then developed fever because of the sound and eventually died.

The priest was asked to change his route and the bell silenced. This too did not have any impact. Semmelweis was frustrated to see all his efforts fail and so he went on a break. We say, he did just the right thing.

When Semmelweis joined back, he found his colleague had fallen ill and died. Semmelweis’s colleague was a pathologist. It was common for pathologists then to die in this manner.

The pathologist at Semmelweis hospital had pricked his finger while doing an autopsy on someone who had died due to childbed fever. Semmelweis studied the symptoms and realized that the pathologist had died of the same thing that killed the woman on whose body he was performing the autopsy. It was thus confirmed that childbed fever could kill not just women but men too.

Now, the hospital had two wards — one had all-male doctors and medical students, the other had female midwives. More women were dying of childbed fever in the ward being attended by male doctors.

Semmelweis realized that the one difference between the two was that male doctors were also carrying out autopsies but midwives were not. He then came to the conclusion that while the male doctors and medical students were performing the post-mortems, some particles from the bodies must be getting stuck to their hands that passed on to the women they helped with childbirth.

Semmelweis thought that if there was a way to get rid of the particles getting stuck to hands deaths could be avoided. He ordered his staff to start cleaning their hands and instruments with a chlorine solution. Semmelweis did not know anything about germs he was only trying to get rid of the particles stuck on hands and instruments. The other thing he wanted to get rid of was the foul smell. Chlorine helped him achieve that. Once the move was implemented, the rate of deaths due to childbed fever plummeted. Problem solved? No.

WHY WAS HE CALLED “SAD SEMMELWEIS?

So, why was he referred to as SAD SEMMELWEIS? It was because no one took him seriously. Doctors blamed Semmelweis for blaming them. Now, Semmelweis never blamed them but they thought they were being blamed for causing deaths. Semmelweis lost his job and eventually died in a mental asylum.

It was only after his death that the world realized his genius. But even today people do not take hand hygiene seriously and that includes MANY medical practitioners.