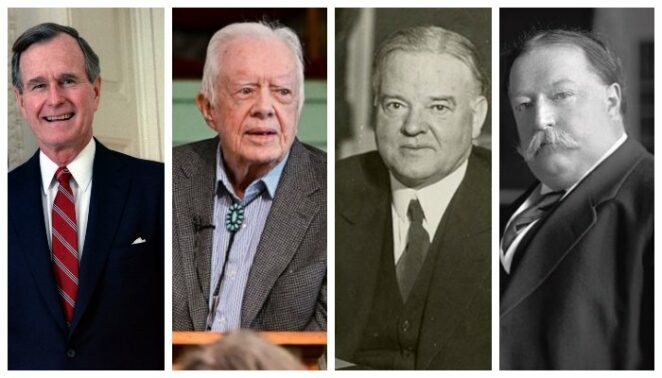 The counting of votes for the 46th presidential election in the United States is in its final stages, with a close contest between Donald Trump and his presidential rival Joe Biden.

The decision on who will be the next incumbent of the White House will be made soon, but according to the US Constitution, any candidate can be elected President at most twice, that is, he cannot run for a third term. Donald Trump is running for a second term, but if Trump loses, he will be the first president since George W. Bush Sr. and the sixth overall president to lose a second term.

Five US presidents have lost their second term ahead of the November 3, 2020 election.Let’s take a look at who were the American presidents who did not win the election for a second term.

William Taft was the first US president to lose a second term in the 1912 presidential election.

The second US president to lose a second term was Herbert Hoover, who served as president from 1929 to 1933, but when he took office the world was in the throes of the Great Depression and economic problems were the main reason for their failure for the second term

President Richard Nixon resigned after the Watergate scandal came to light and Gerald Ford became President of the United States. Gerald Ford could not win a second term because of the acquittal of Richard Nixon and the failure to control the economic situation.

Jimmy Carter, who defeated Gerald Ford to become president in 1976, also failed to win a second term. Even under Jimmy Carter, the US economy did not improve and the US could not release its citizens held hostage in Iran, which was the main reason for Jimmy Carter’s defeat.

Despite his landslide victory in the Gulf War, Bush Sr. failed to improve the US economy and lost the 1992 presidential election to Bill Clinton. George W. Bush Sr. is the last president in US history not re-elected, and only after the full results of the presidential election are out will it be decided whether Trump joins the list.