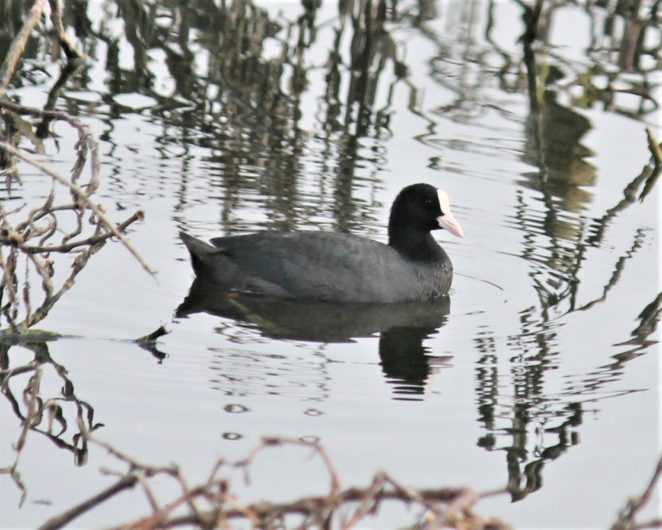 Yesterday I saw one new bird (at least to me) which I mistook for a duck. It was its sharp piercing whistle ( a kind of coook coook noise)  that made me notice the bird in the dimming light of the dusk.

I took a few picture of this bird and later released that the bird’s beak was nothing like that of a duck. The beak is like that of a hen which is white in contrast to the jet black feathers of the body. It has a white shield extending from the beak up to the forehead.  The coot also has have rounded wings.

The coots fly, but not before pattering their feet vigorously in water for sometime before they become airborne.

The Eurasian or Australian coot as it is called has very strange looking feet. Instead of web like ducks they have lobes on their toes. They have very funky looking feet indeed.

Their small ones have red heads which you could easily mistake for a chick of the moorhen. The coots diet consists mainly of insects, mollusks, worms, amphibians and fish.

These Eurasian coots belongs to the family of Rails the same as the cranes. They are not related to the ducks or the moorhens.