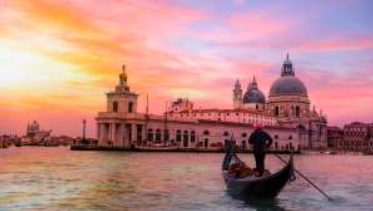 “Venice is like eating an entire box of chocolate liqueurs in one go.”

“They’ve gone,” observed Marcello. “Disappeared overnight.”“Huh-huh.” Gino nodded. “Woche reckon happened?”“Something cataclysmic.” Marcello was known as the wise one of the group.“Reckon they’re extinct,” ventured Rosa.“Yeah, you’re right, Rosa. Crawling all over the place one minute and now, nothing.”“Just as well,” muttered Gino. “Vermin. We’re better off without them… Hey, look. Is that one down there in a gondola? Just gone under Fenucci Bridge?”The other two peered down, but there was nothing other than an eerie silence.The three pigeons fluffed their feathers and flew off. “You’re right, Rosa, the human race is extinct, but birds can flock together once again.”