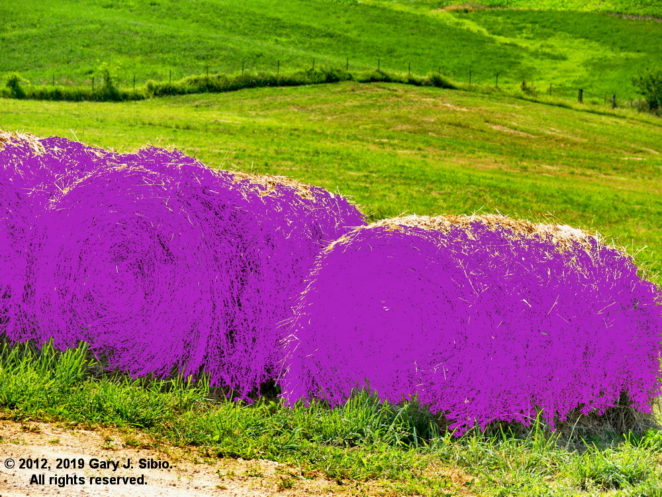 The bales of hay were at the farm at Red’s Flea Market, 11658 Red Gates Rd., Galena, Illinois.

The song “Purple Haze” by Jimi Hendrix was probably most peoples’ introduction to the guitar virtuosity of the late Jimi Hendricks. Most people assume that it’s about drugs but Hendrix said that it was actually a love song. The girl has left the singer in a confused haze. Interestingly, an early copy of the lyrics in Hendrix’ own handwriting has the title as “Purple Haze – Jesus Saves.” The line “‘Scuse me while I kiss the sky” is not a drug reference either. Hendrix was a paratrooper in the Army and that is what they would shout as they jumped out of the airplane.

I used a Panasonic DMC-FZ50 camera with a Hoya linear polarizer to take the photo. The editing was done with ACDSee Ultimate 2019. I started by using the eyedropper tool to change the hay bales to purple. Then I adjusted the lighting and boosted the contrast. I adjusted the levels and the tone curves and lowered the saturation and brightness of the purple.