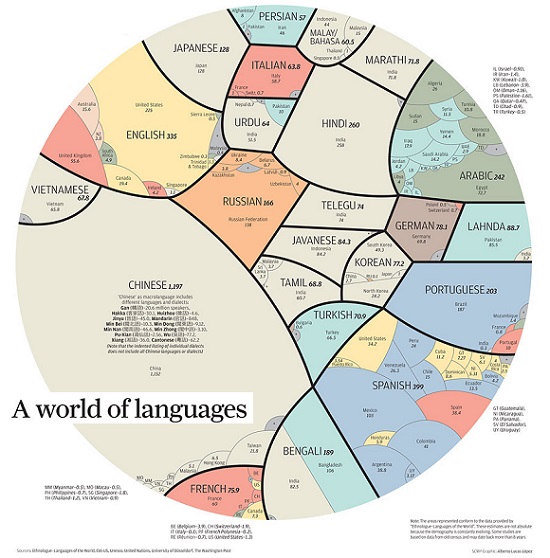 There was once a time, I thought it would be fun to be a linguist.

My inspiration was the late Eartha Kitt (1927 – 2008), an African-American multi-talented entertainer, who was fluent in several languages. Seemed like the coolest skill to have! Not only that but I could probably get a job working as an interpreter for the United Nations.

Alas! It never happened.  *C’est la vie!* as the French would say.

Even though I never acquired the skill to speak several languages, it was very easy to prepare a list of a dozen languages that I thought would be good to know.

My inspiration for coming up with a list was an infographic published by Earth Porm which showed the world’s most spoken languages.

Here are some fascinating facts extracted from the Earth Porm article:

* Around the world there are a total of 7,102 known languages, of this gargantuan amount twenty-three remain popular enough to be considered the most spoken languages of the world.

I decided on a dozen or twelve (12) languages (list below) that should be learned by anyone who wanted to open doors and communicate with almost everybody in the world.

My choices are not totally arbitrary.  There were certain experiences or events in my life that made me add them to my list.

* Although English is the official language in the USA, lots of people also speak Spanish and French.

* I became interested in Latin because many English words are derived from this dead language.

* Hebrew, Greek and Aramaic were chosen because I study the Bible.

* Arabic?  Just picked a language I thought one should know to communicate with people from the Middle East.

* Hindi?  I watch a lot of Indian or Bollywood movies.  Sometimes I can’t find the ones that I want to watch with English subtitles.

* Russian.  My brother once told me that the United Nations always needs people who can speak this language.

* Chinese?  Figured it would make me seem smart and would impress a lot of people!

* Swahili?  When I attended university during the 1970s, lots of African-American student were learning to speak this language.  Guess it was an effort to go back “our roots”.

See The World’s Most Spoken #Languages In One Eye-Opening #Infographic ~ “The most widely used language is #Chinese …” ~ https://t.co/wpjZh6lGXv pic.twitter.com/ZtLOmLylU5