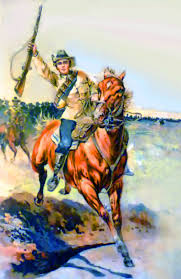 The lion still lives inside your hearts!

The time has finally come brothers and sisters, we need to let the lion out.

I did not create this video. At the beginning of the video, it shows who the producers are. They have been here before. The most sought after fighting men in the world. They were and remain #Boer #boervolk #MenofWar experts in #guerrillawarfare For this reason…not even the might of the British empire and 500,000 British soldiers could combat these tactics of 88,000 Boer soldiers. This led to Lord Robert Kirchner enacting the scorched earth policy.

Thousands upon thousands of their farms and homes were burned. Their women and children put into concentration camps in the most cowardly means imaginable. 27,000 of them died in those camps…mostly children. Starved and fed ground-up glass. In spite of this atrocity, the women did not want the men to surrender. This band of farmers kept the war raging on for years and bankrupted the mighty British empire. BOERE, Remember who you are. Do not forsake your brothers. The time has come. You are forever…THE MIGHTY BOER and the LION live inside of your hearts.