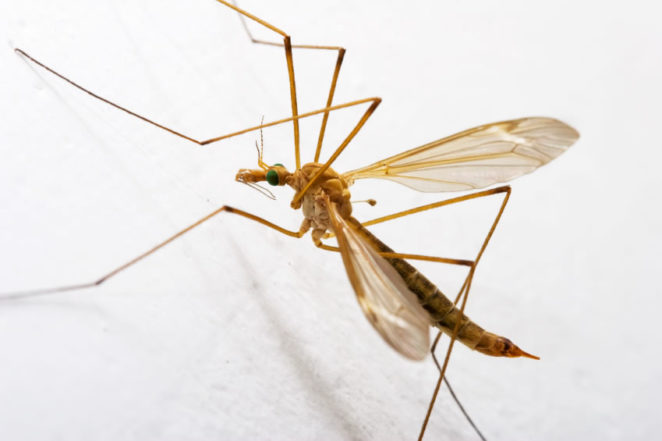 Crane flies belong to the order of Diptera and are related to mosquitoes, although they do not bite. The species usually found in the United Kingdom are commonly known as “daddy long-legs”.

They are readily recognized both from their legs – which are only weakly attached to their bodies and can easily break off – and their long, narrow wings. Some of the larger species, such as the phantom crane fly, have wings that stretch to 2.5 cms in length.

Crane flies are mainly nocturnal and are usually only seen inside a house during the day when they have got in through an open window after dark and become trapped. Campers regularly see them dancing round their lamps and torches in the evening.

Female crane flies lay their eggs in damp soil and these hatch into larvae that are grey or pale brown in colour. Some species feed on dead and decaying matter, some on small insects and some on plant roots.

It is the plant root feeders that cause most trouble to gardeners, horticulturalists and greenkeepers. The larvae, known as leatherjackets, can quite easily kill plants, including grass, leading to bare patches on otherwise pristine golf and bowling greens, for example. Another problem is that leatherjackets are tasty snacks for birds such as crows, which peck annoyingly large holes in the grass to reach their prey.

Despite all the treatments that have been devised for tackling leatherjackets, there still seem to be plenty of adult daddy long-legs surviving to get in the hair of summer-time campers!