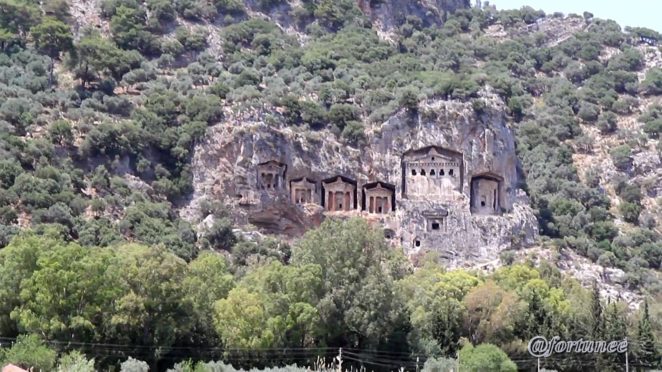 The ancient city of Tlos has a long history. The city was built in the 19th century BC and was part of the Hittite Empire. Later, Tlos was one of the six largest cities of the Lycian Union and the sports center of the Federation. Tlos belonged to both the Romans and the Greeks, and then was part of the Ottoman Empire. Up to the 19th century Turks lived in the city.

Tlos is known for its acropolis – the upper city, the fortress on the mountain and the Lycian rock tombs. To get to the city of Tlos is best by car or as part of an organized excursion. By public transport, it’s not convenient to get to Tlos: first, you need to reach the dolmush, which goes from Fethiye to the Saklikent gorge, and then on a ride or on foot about 4 km to the ruins of Tlos. We went to the Tlos from the Saklıkent gorge by car бы the navigator, who led us by country роадс, and then began such a narrow road that led to the Tlos.

At first, we saw the ruins of a Roman amphitheater – 34 rows per 20,000 spectators, built in the 2nd century BC. And they built an amphitheater for 150 years. We did not stop at the theater, we later observed it from the height of the fortress of Tlos