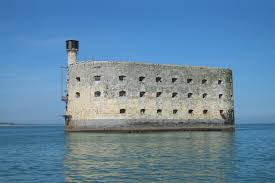 Fort Boyard is shaped like a bathtub and sitting on an island it looks like it’s floating on the sea. This 200-year old fortress is located off the western coast of France. In the 1600s it became part of a military project during the reign of Louis XIV. However, due to some difficulties, the project was never finished.

Then in the 1800s under Napoleon Bonaparte, they became to build the foundation. Unfortunately, under British attacks, the work was once again stopped. It continued almost 30 years later under Louis Phillipe and completed in 1857.  The result was an oval-shaped island fortress. Fort Boyard can hold 250 soldiers and 74 guns.

Since the time of its completion the fort has been used as a military prison, a movie and TV backdrop, and recently for a French TV game show called “Fort Boyard.” Those participating in the show are asked to complete both mental and physical challenges.