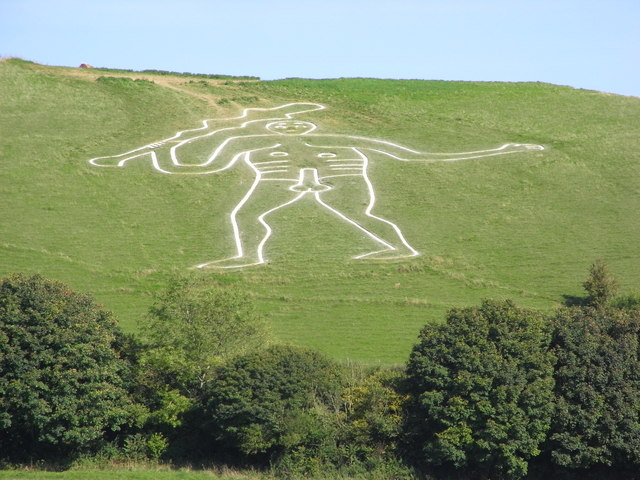 The chalk hills of southern England are renowned for a number of figures cut into the turf, mostly in the shape of horses. However, some of the figures are very different in nature, and Dorset’s Cerne Giant must surely count as the most remarkable.

This is an outline, with internal details, of a giant man with a huge gnarled club in his right hand. He stands 55 metres (180 feet) tall and his club is 36 metres (118 feet) long. However, it is not the club that is the feature most often commented upon, given that this giant is distinctly X-rated, sporting as he does a massive erect phallus, complete with testicles! 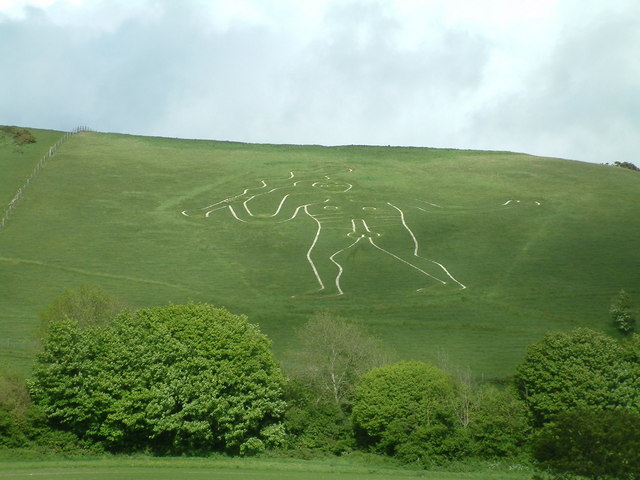 The giant is carved into a west-facing hillside close to the village of Cerne Abbas, and is visible from the main A362 road that runs from Dorchester to Sherborne. Enter “Cerne Giant” into Google Maps and you will soon be able to see him in all his glory!

The mystery is therefore to do with why he is there, who put him there, and when? Also, is he supposed to represent anyone in particular?

The chalk hills of Dorset were occupied from at least the Bronze Age (c. 2000 BC) and particularly so during the Iron Age (from around 250 BC). There are many examples of Iron Age hill forts that were used as refuges when danger threatened and were reinforced with extra banks and ditches at various times.

However, these proved to be of limited use when the Romans under Vespasian conquered the Durotriges tribe who lived in this region. One such fort, known as the Trendle, is very close to the Giant’s head, so could the inhabitants of the fort also have been the creators of the Giant? It is known that many other English chalk carvings date from around this period, or even before.

As for whom the Giant represents, various theories have been put forward. One is that he is an image of Hercules, which would preclude him from predating the Roman invasion.

There is a legend that he marks the place where a real giant lay down on the hillside to sleep, but the locals cut off his head and marked his outline on the turf, rather in the manner of murder squad police officers in more recent times, to warn off any other giants who might be around.

Whatever his origin, his purpose has generally been agreed to have much to do with strength and virility. For centuries it was the custom of local couples to spend the night before their wedding sleeping on the Giant’s phallus in order to boost their fertility. Presumably, given the fact that this area has produced many generations of children over the years, the practice has something to recommend it!

One surprise is that the Giant has never fallen foul of any of the regular bouts of religious Puritanism to which Britain has been subjected at various times. Even the Victorians, who covered the legs of pianos lest they be thought too provocative, allowed the Giant to maintain his pride and joy on full view. Perhaps it has something to do with Dorset people having more sense than to fall for such nonsense!

Or is he more recent?

However, if the Giant is so ancient, and he is a pagan fertility symbol, why is it that no mention of him appears in the record before 1694? John Aubrey, the 17th century writer who was very interested in the antiquities of the Dorset and Wiltshire downlands, makes no mention of the Giant. There are references in medieval texts to the Trendle, but the massive and remarkable chalk-cut figure right next to it was apparently not worth a mention!

The 1694 reference is to a payment made for maintenance of the Giant, something that has to be done from time to time to keep the outline clear. The giant must therefore have existed before that date. There are 18th century references, one of which asserts that the figure was less than 100 years old at the time.

Recent research has indeed suggested that the Cerne Giant only dates from around the time of the Commonwealth (1649-60) when Britain was a republic led by Oliver Cromwell. The Cerne estate was then held by Denzil Holles, who had been on the Parliamentary side during the Civil War but later became violently opposed to Cromwell, who was likened by many opponents to Hercules. Could the carving of a Herculean and priapic figure in the turf of Cerne have been Holles’s way of mocking the arch-puritanical man he so despised? 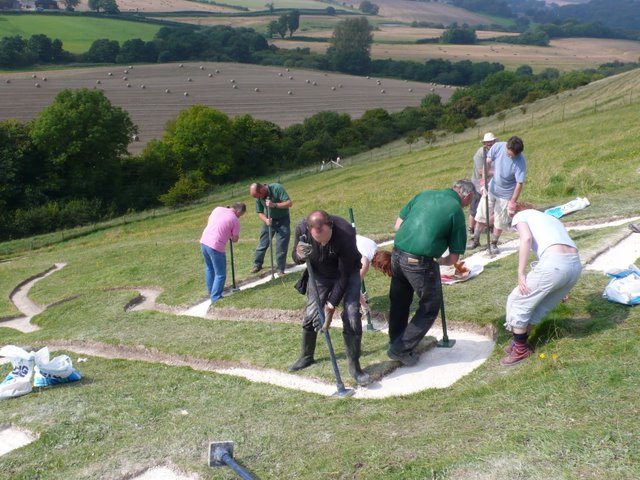 Whatever its origin and purpose, the Cerne Giant continues to be an attraction to visitors and a world-famous iconic image. There was controversy in 2007 when an image of Homer Simpson holding a doughnut appeared alongside the giant, although this was done in washable paint and has disappeared long since. Dorset is justly proud of its Giant, and will doubtless continue to be so for the foreseeable future.