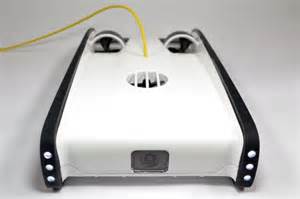 I am super excited today; I read an email from the TridentROV team. I am excited with the progress they have made and am looking forward to launching the ROV in the bay and seeing what lies beneath the water. The difference between what lies above and what lies below is always interesting. Underwater or tethered ROV’s are interesting products. I had the previous ROV product from the team that is building the Trident. It was well built and never had water issues. My new favorite TV show, Secrets of the Underground, using ROVs in the two episodes I’ve seen so far to see what is under the surface of the water.

Underwater drones have tethers or cables that connect them to the receiver. The main reason is it is very difficult to maintain a wi-fi connection in water. The more water and the deeper it is, the less of a Wi-Fi signal you will be able to maintain. That means for underwater you have two options; the first is have a drone (like Squadron) that lands on the surface and floats but does not go underwater. It has an underwater camera attached to the body, or you can use the Sonar module.

For boaters, it lets you quickly see what the condition of your hull is. Or to see what is ahead of you in shallow water. Or, to stare face to face with a grouper, although it wouldn’t know you were at the other end of the tether.

Now if you also consider those who fix boats, they would have significant use for an ROV. You can quickly determine the status under the boat including propellers etc., without having to pull the boat out of the water. You simply send in the drones! By the way, roof repair professionals that have a drone, reduce the number of times they have to climb on the roof. Do the initial assessment by flying drone; then you don’t have to be on the roof.

The explosion of capabiliites is amazing. The amount of data produced is always growing. Effectivly you are only limited by the edges of the sky, the length of your tether underwater and how long your batteries last!