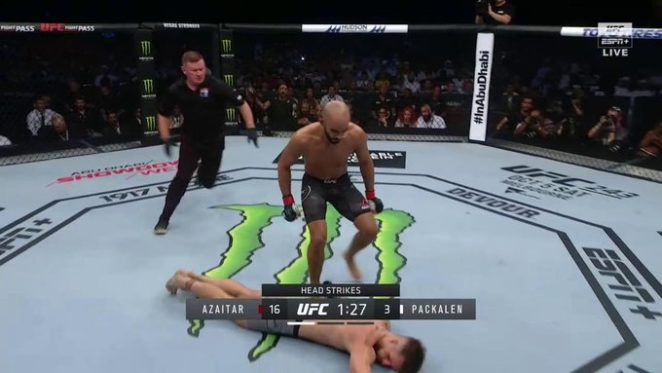 The first preliminary bout of UFC242 in Abu Dhabi, United Arab Emirates (UAE) gave us one of the most horrific knockouts in mixed martial arts (MMA) history.  In the lightweight (155 lbs) division, UFC newcomer Ottman Azaitar knocked out Teemu Packalen with 1:30 left in the first round.

The vicious KO occurred when Packalen threw a lazy jab without bring back his left hand to defend his face.  Azaitar threw a counter right hook that landed behind left ear of Packalen.  Packalen lost all equilibrium and landed right on his noggin.  Packalen was unconscious for a short time because his legs began to twitch involuntarily.  Although Azaitar won with a gruesome KO, he will need to throw more body shots in his next fight.  Packalen should pack it in (wordplay, pun intended).